We wanted to update you guys on our FrogLube tests. At this point we have put thousands of rounds through our guns using FrogLube. I have to say, that we have all come to the conclusion that it is far and away the best lubricant available for firearms.

If you are worried about rust prevention, I think Eezox is the way to go. If your guns are going to sit in a safe or case for a long time, my process now is to use FrogLube and do an exterior wipe down with Eezox just as a preventing agent.

Originally we learned about FrogLube on forums. It was always described as some kind of wonder lube. I don’t know if it’s going to make you shoot better but I will say it is the best gun cleaner / lube we own or have ever used.

I have a closet full of cleaners, lubes and solvents. From Hoppe’s #9, to Ballistol, to M-Pro 7, to CLP, to Weapons Shield, to Gun Butter, to lithium grease (great for the AK), to MILITEC-1, to Slip 2000. I mean, I literally have a closet full of this crap. No more, I’m throwing it all out except for the M-Pro just because it is such a kick ass cleaner / degreaser.

The basic premise as described in our earlier posts HERE & HERE is, you apply FrogLube with the use of heat and then just use it as your primary cleaner / lubricant. After several applications carbon will build up but will just wipe off. You can get the FrogLube kit that comes with an applicator brush, a microfiber towel, Lubricant Paste and Liquid. We use the liquid to clean (has the consistency of ketchup) and the past (has the consistency somewhat of shoe polish) to lube as we have always been a fan of using grease for lube as it stays where you put it.

So what’s it on and what’s the difference after using:

AK – biggest pain with an AK is the piston. You get a ton of buildup of the stem and I have had to uses a scouring pad in the past to get it clean. It gets far too hot for any lube to survive. But with FrogLube, you can put a little bit of the liquid on a cloth and the carbon just wipes right off. It is nuts how easy it is to clean now.

Handguns – GLOCKs to 1911s love the stuff. It stays put and after 1200 rounds with out cleaning through a GLOCK 17, the carbon just wipes off. Even on the front of the chamber where you get that carbon crust that I used to use a knife to scrape off, it just wipes off with a little work.

10/22 – We used to use drilube as 22lr is fairly dirty and with regular gun oil buildup can happen fast. In the past I have even used graphite which works fairly well getting you through a hunting season. With FrogLube after the initial treatments on the bolt and springs just a little bit of the paste keeps the gun lubed and shooting box after box or 22 ammo. I took my nephew out with his friends shooting. We had a 10/22 and a 22 win mag bolt action, both treated with FrogLube. We literally shot nonstop for 3-4 hours, the boys were having a ball with no issues from the guns other than those caused by ammo and we shot well over a thousand rounds that day. When we got home and cleaned the guns, the carbon just wiped off the 10/22 bolt with a little FrogLube liquid on a towel. What would have been about an hour of cleaning took 15 min.

Mosin Nagant Type 53 – Amazing how it makes bolt guns silky smooth. The bolt was tight and sticky, after a doing the heat treatment and using the paste the gun is smooth as silk. Still kicks like a mule but that’s a topic for another day.

Shotguns; semi autos, pumps, and over & unders – Awesome, just awesome. On a Beretta 3901 semi auto it makes the action smooth and clean up a breeze. Same with an 870 pump, the carbon just wipes off. On my over & under the action breaks better on open and close.

AR-15 – Wow, this is where FrogLube really shines. The bolts just wipes up clean. And as I have said before the lube stays put. We used to be a big fan of Slip 2000 for ARs but FrogLube makes a huge difference.

All that’s great but the best things about FrogLube are; one, its non-toxic & biodegradable so there’s no need to have your hands smell like solvents or to were latex gloves to clean your guns and two, if you have a significant other, it may save your relationship. My wife was never been a fan of the whole house smelling like gun solvents (I still love that smell). FrogLube has a minty smell that washes off with soap and water and makes your house smell great. My wife has done a complete 180 on gun cleaning since I started to use FrogLube. 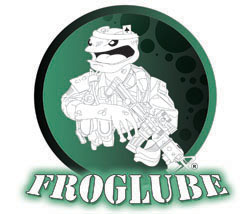 In the end, believe what you will, it took me a long time to bite the bullet and try the stuff. I am very glad I did. If it seems like someone is freaking out about FrogLube and may even be a little annoying about it (smile) it’s because the stuff works and works better than anything else we have ever used.  The amazing thing is, after every application and range time it just gets better and that much easier to clean. It may not seem amazing the first time you use it but follow the directions and use it for a while, it just keeps getting better over time. As I said, I’m throwing out all the other solvents and lubes in the closet (except for M-PRO 7) and going with FrogLube from now on!