Have you tried the new Magpul MOE SL handguards? They are pretty nice for $35. Not a lot of bells and whistles but just what you need for a cheap build. They are not as massively thick as the earlier MOE and they are a little bit longer which is a huge perk. They do this by extending under and to the sides of the front sight block giving you an extra two inches.

The MOE SL handguards have M-LOK and I was hoping that that would solve some of the issues with the original MOE and open up a new world of accessories. One of the accessories that Magpul got right with the original MOE is the cantilever light mount. If you want to add an Inforce WML to a MOE it kicks the light out a bit in a more ergonomic way than just adding a picatinny rail piece to that slot. I was hoping the same part would work as well on the SL handguard. 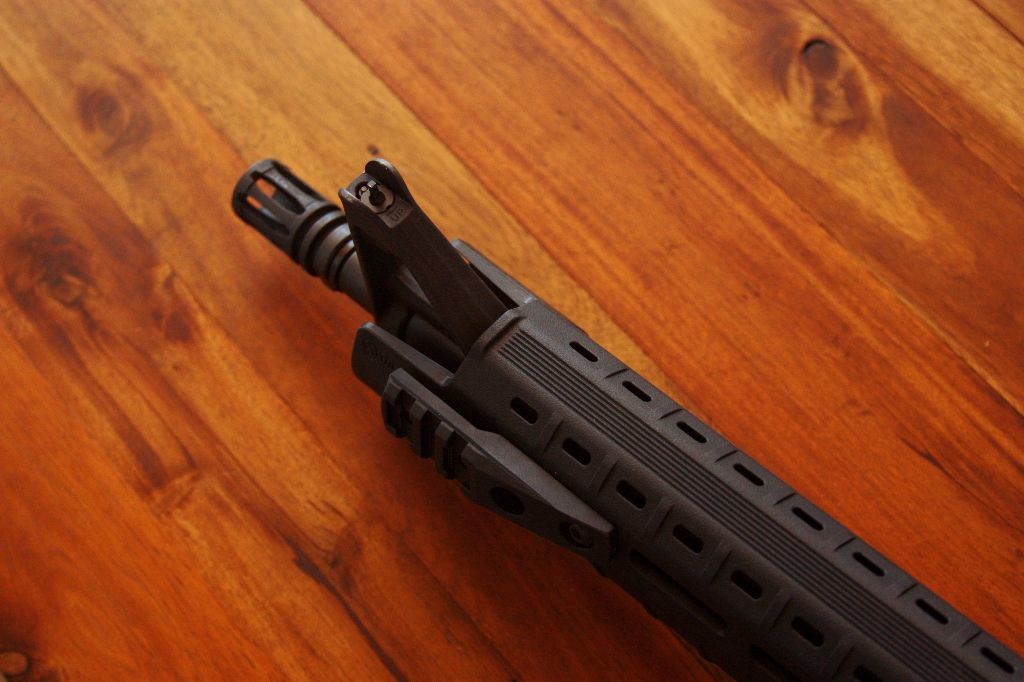 Unfortunately, this is not the case. It’s not really the cantilever light mounts fault, it has more to do with the handguard. Magpul didn’t do anything with the slot design to make it better than the original MOE other than making it M-LOK. You get all this extra real estate but the mount is so far back if you want to mount a light. So you adjust your grip for the longer handguard but when you add a mount to the last M-LOK slot your hand sits right on it. It sucks! I understand why Magpul had to do it that way but I think they phoned it in on this one. They could have come up with a better solution. 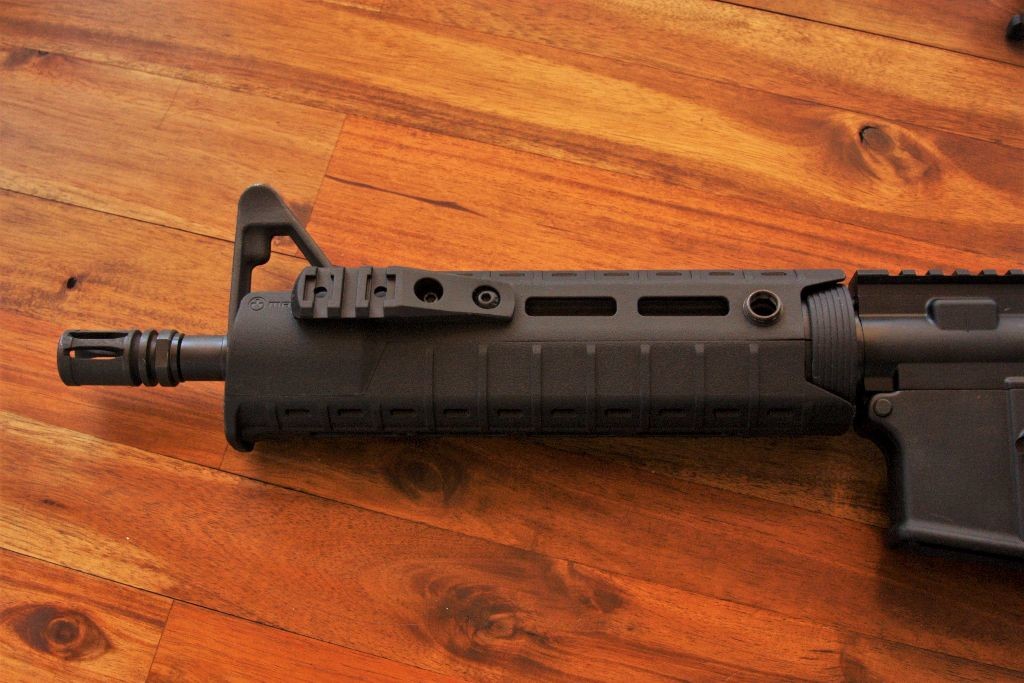 I had a buddy that needed cash fast (love when this happens) and dumped a PSA 10.5 upper on me for $100. It shoots great and he only put maybe 200 rounds through it. The upper came with the crappy M4 Handguards and I immediately replaced them for the MOE SL. The upper grew a lower as most do and now it sits as a pistol but it needed a light. Hence why I have been trying to figure out the best option for mounting a light to the MOE SL.

The best game in town for this type of stuff is Impact Weapons components (who desperately needs a new website by the way). They have a SMC Scout Light Mount-N-Slot for the old MOE that they told me they were updating for the new SL by making it longer and M-LOK compatible. This may be a great option if you are not down for modding your handguard. I have one of the old SMC that I purchased for an older MOE. I mounted it on the handguard and then took it off as it was in the way of how I hold my rifle.

There had to be a better way. In pursuing their website, I came across one of IWC’s original mounts; the TMC Scout Light MOUNT-N-SLOT which is a cantilever mount that is supposed to mount to the M4 handguards through the vent holes in the top. I looked at it and said, why would that not work if I drilled the holes in the top of the MOE SL? So I pinged IWC and their response was “No, the TMC needs a flat surface”. My thought was – What? The top of the SL is flat (but maybe IWC wants a larger flatter surface for the TMC). Thinking it would work, I ordered one. As with all IWC components the mount it is rock solid. I looked at the mount and then looked at the MOE SL handguard and said “This will totally work and if not, I’m out a $35 handguard or at the very least have one with holes in it”.

Now I needed a light. The TMC was originally set up for a Surefire Scout light. IWC updated it at some point with two vertical holes which will accept any of of their light mount rings like the Thorntail mounts. There is also a 1913 Picatinny section and a locking slot allowing it to accept a Inforce WML or Surefire X300. On one of my last builds I went with a Scout setup and thought it may be a perfect fit with the TMC mount.

There is this small company called Arisaka Defense that makes a light body for the Surefire Scout that allows you to buy a Surefire tailcap and a Malkoff Devices E1 Scout head to make your own Scout light for half the price (you should check out their Keymod light mounts by the way as they are the best in the industry). The Malkoff heads are awesome and I have used them for years in older lights I wanted to update to LED. I have complete faith in their products. You can now buy the complete assembled lights from Arisaka. 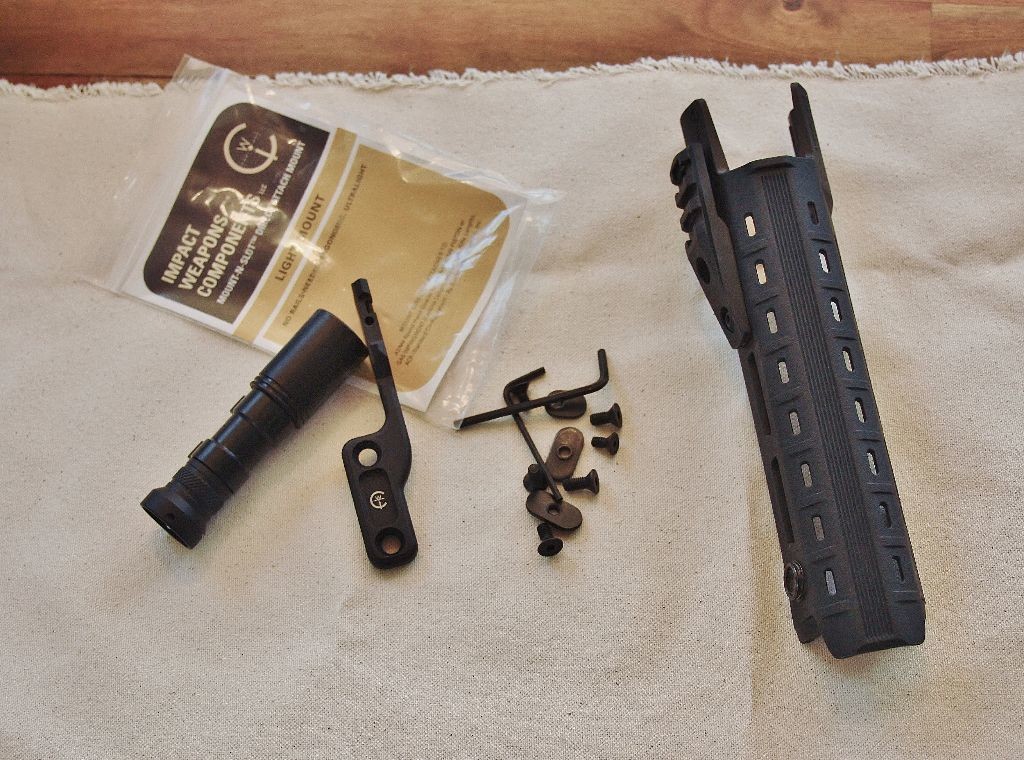 I finally got all my pieces together and went about with the install this weekend. It was unbelievably easy. I used a 13/64 drill bit (just what I had on hand) to drill the first pilot hole. When you flip the MOE SL over on its back you will think there will be clearance issues. Because of that and the fact I didn’t want the light right next to the muzzle I moved it back a ¼ inch. As an FYI there is no clearance issue, mount it where ever you want. Magpul has a mold mark right at the front end that is a helpful mark point for the first hole. I went a little in front of that and drilled out the first hole. 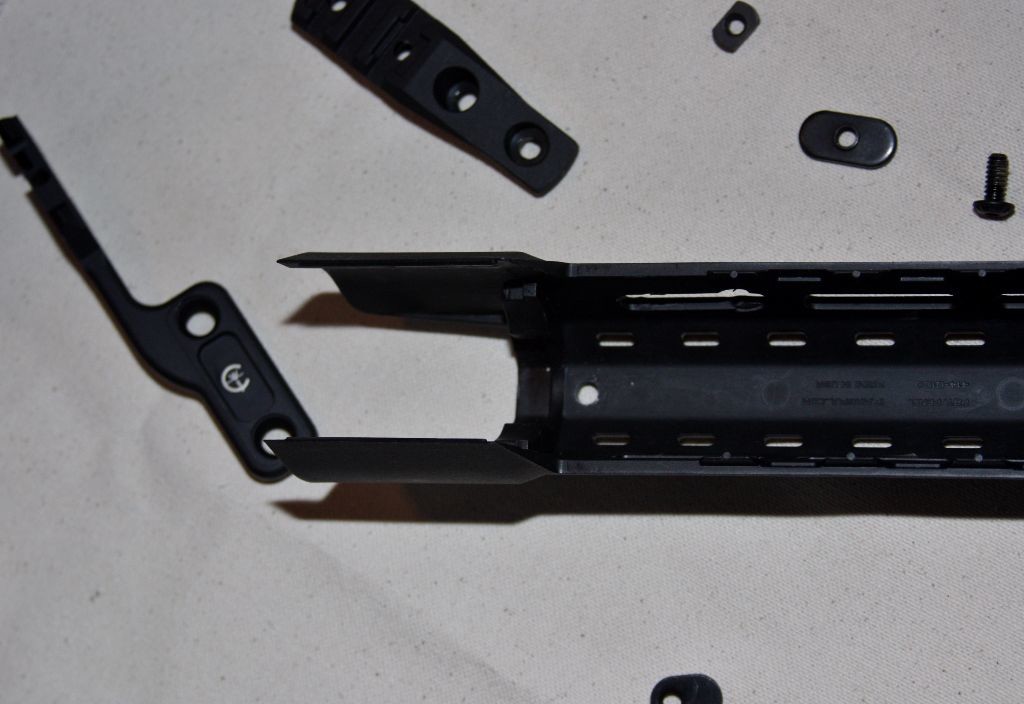 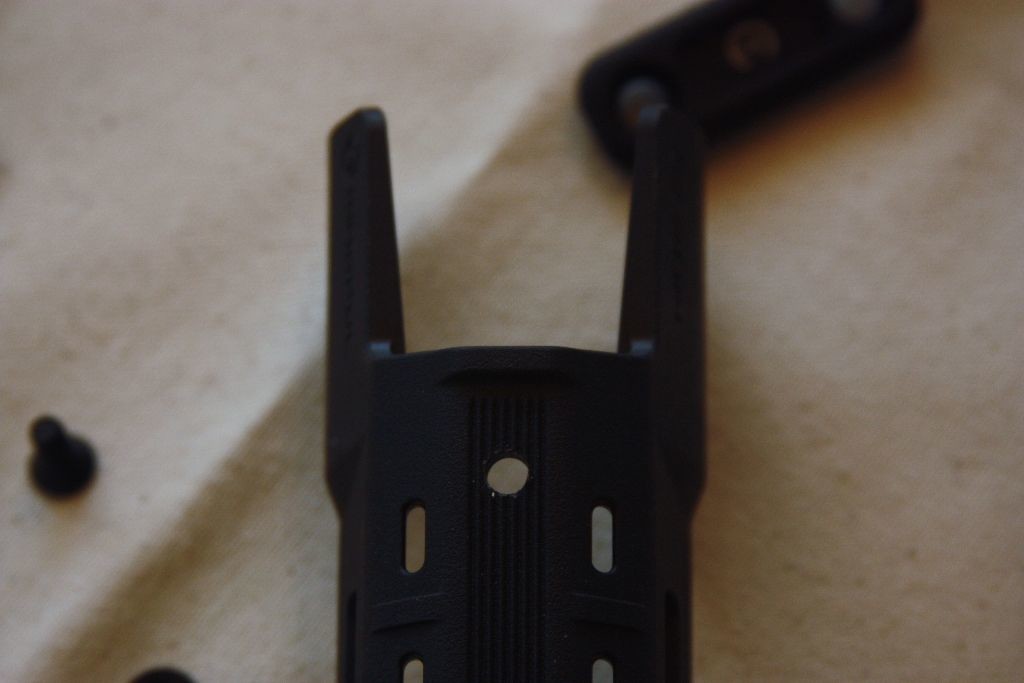 Next the IWC hardware has a lip to the nut that I chose to countersink into the handguard by using a 15/64 drill bit. Again this was in reaction to a clearance issue that doesn’t exist. So mount them however you want. 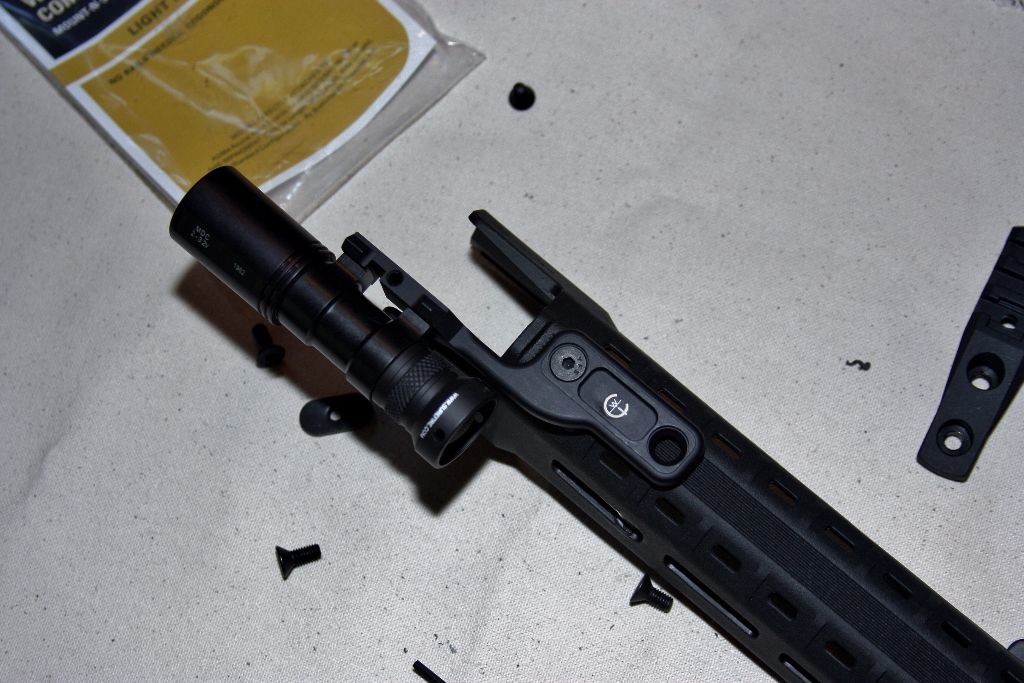 I then mounted the mount to the top of the handguard and used the mounts second hole as a guide. I followed the same process of first hole with the 13/64 and counter sunk the other side with the 15/64. Mounted the second screw, mounted on the scout light and put the handguard back on. The process literally took 10 min. 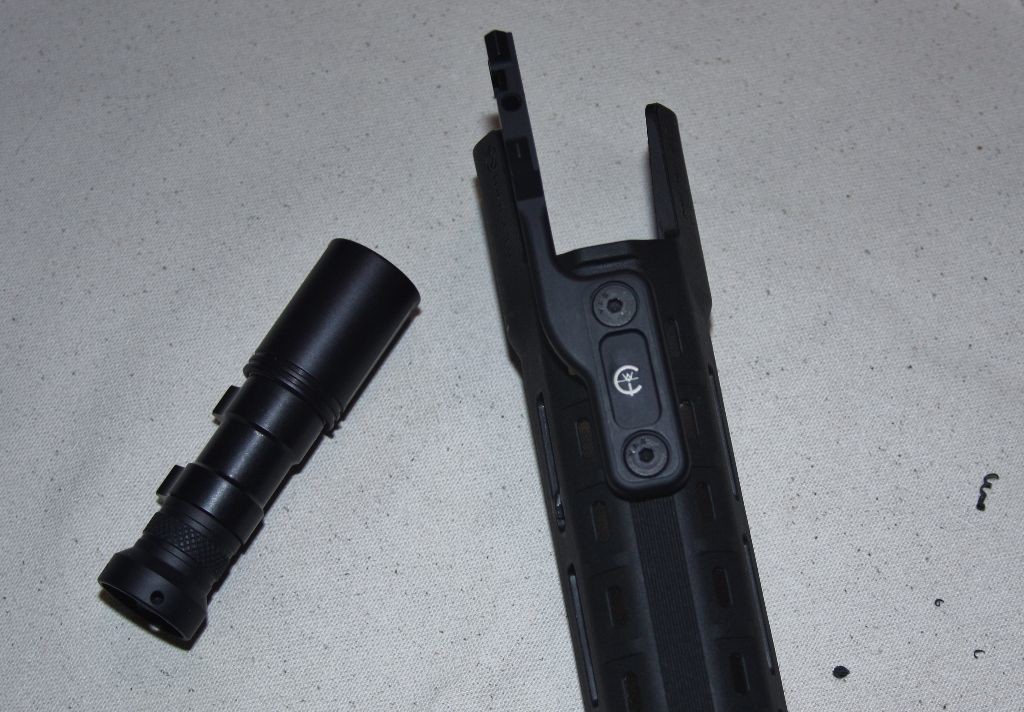 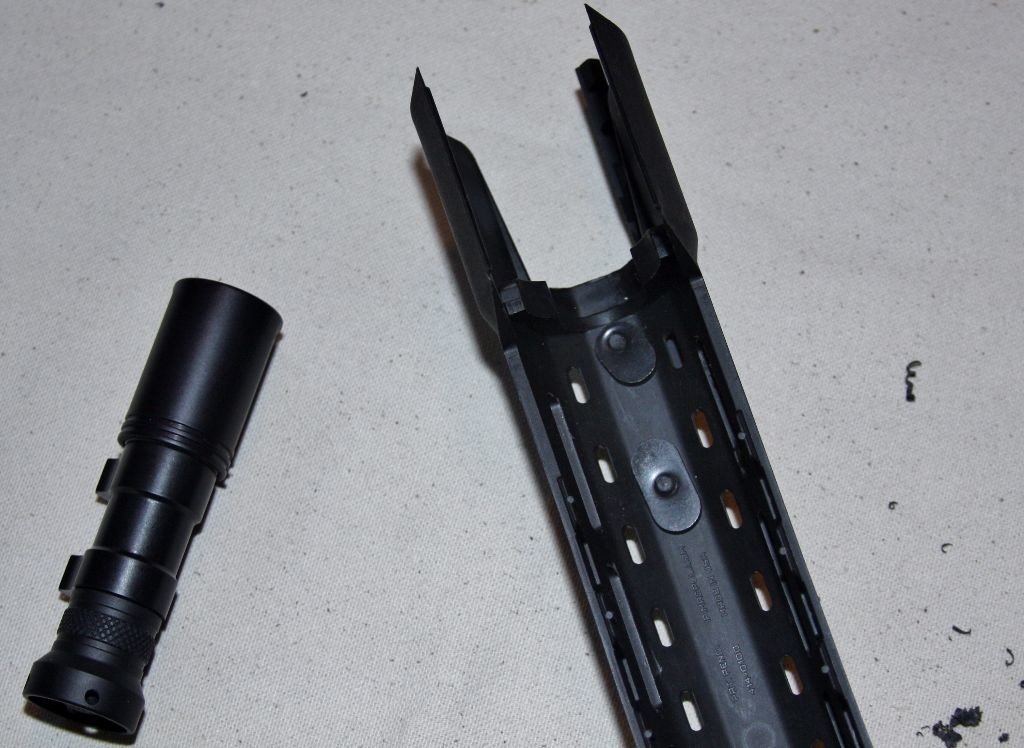 So my first question was how well does it work? It’s almost perfection. I have to change my grip slightly to get my thumb on the tail cap but no more than the setup on my original MOE with the Inforce WML. For the most part the light is out of the way unless you need it. That’s way it should be in my opinion.

My second question is, is it durable? There is no question in my mind that the IWC mount or any IWC products are rock solid and there will be no issue there. Loctite your screws and you should be good to go. It is possible that if you caught the light on something that you could rip it out of the polymer. The polymer is thicker there than it is where the M-LOK lock nuts lock into place in the M-LOK slots. This problem to me, is what it is, and you would have this issue no matter what mount you choose. The TMC Scout Light MOUNT-N-SLOT is longer than most so there would be more torque if you caught it on something but like I said – it is what it is. 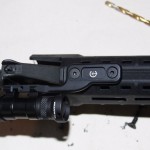 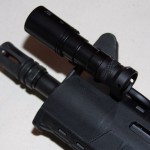 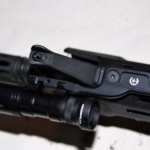 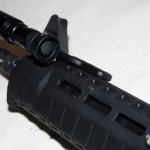 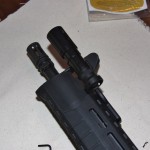 For me, this is a perfect solution for getting both the mount and light out of the way but also having the light where when you need it. This setup also allows me to keep a cheap handguard on this cheap upper but make it functional. If you are looking for a solution to mounting a light on your MOE SL handguard and don’t mind a little modifications to your SL, this setup may be for you.

This post has been slightly edited from its original content to show updated information. We forwarded along the link of this post to Impact Weapons Components as we do with any product related post we do. They got back to us with clarification on the mount and some new feature that we were not aware of:

“we updated the TMC with two vertical holes which accept any of our light mount rings and added the 1913 Picatinny rails, the 4 protrusions, and the locking slot, which makes it accept a WML or X300 type light. We sell a ton to people with M4 type hand guards.

The TMC is very durable. We’ve got multiple LE agencies running and thousands in the field with less than 10 returned for breakage. They can take a hit.”

As an FYI, all products in this post were purchased directly from IWC and Arisaka Defense by us without their knowledge of this review. We did contact IWC through a web forum to see if they thought the TMC mount would work in the config outlined in this post. To their credit they probably waived us off incase we were idiots and would try to blame them for messing up our handguard. I am very happy that we received the updated information from IWC and think this mod is even more valuable now. The TMC mount will essentially work with any light, all you need is the right light ring or an WML/x300 type light. If IWC or Arisaka Defense have any additional future comments they will be quoted below or will appear in the comments.

12 thoughts on “Adding a light to a MOE SL handguard”