Strike Industries (SI) sent us one of their AK Rails for testing and evaluation a while back and I have to admit that looking at the pictures on their website I was not in love. Up till now, I have been using a micro red dot on a Midwest Industries (MI) AK side rail. I’m not a huge fan of the side rail concept but it does allow easy on and off and is great if you want to move back and forth between a red dot optic and iron sites.

As a data point, the MI side rail weighs in at 7.2 oz on my scale, partner that with a red dot and you’re at 11.5 depending on the mount and the red dot. That’s not a ton of weight but you do notice when you take it off to clean the rifle. 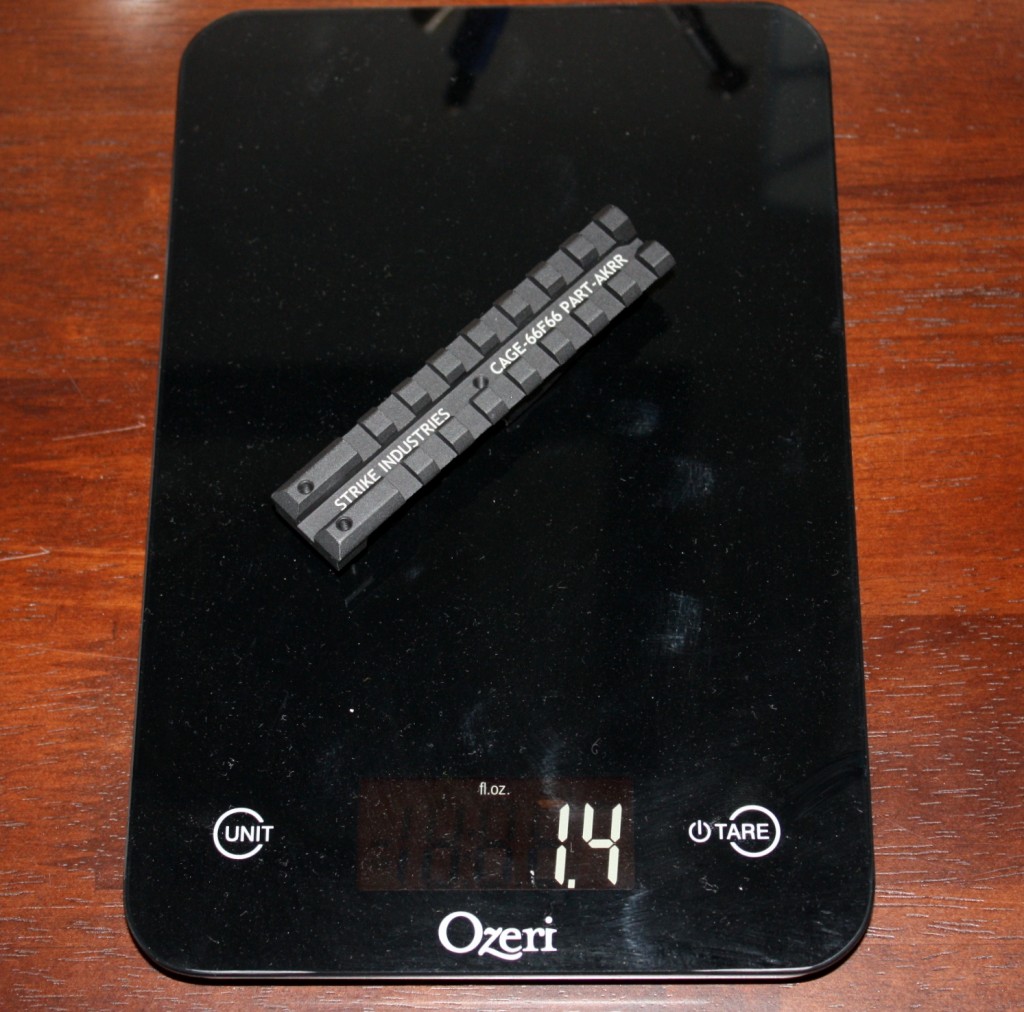 First impressions out of the box, we were impressed. This mount is a super lightweight, like 1.4 oz on my scale lightweight. The AK Rail is made of 6061 Aircraft Aluminum that has been hard coat anodized. The rail comes with instructions, 3 leveling hex set screws, and a horizontal mounting screw & nut that ride where you rear sight rides. 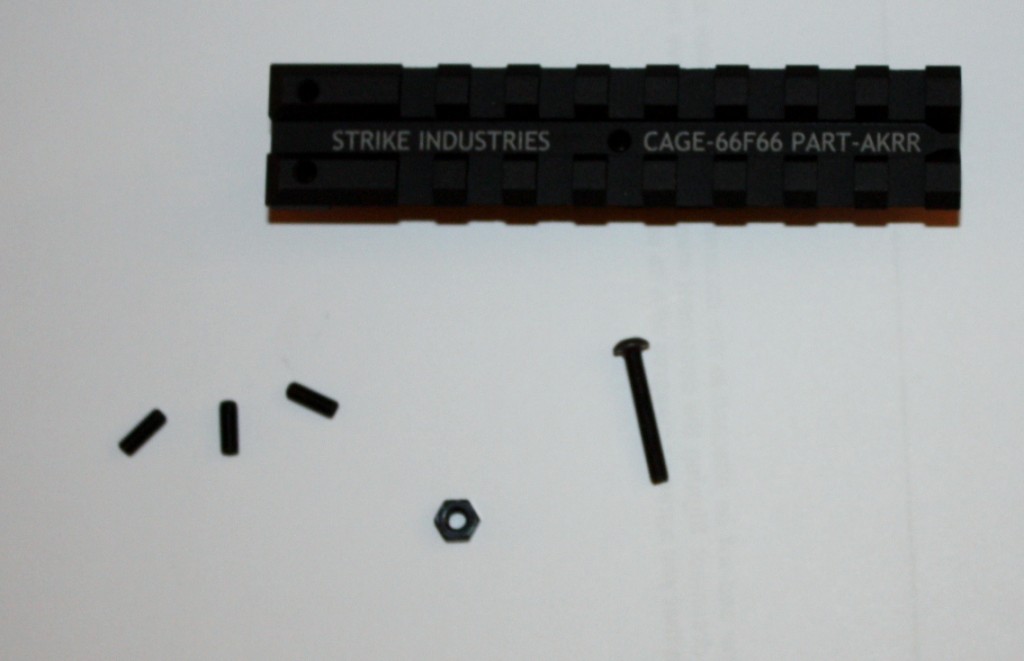 Installation was fairly easy, the hardest part being getting your rear sight off. There are a number of ways to do this, most you can find on the web. My preferred method is to stand the sight vertically and push down on the sight leaf with a screwdriver, once you get the leaf far enough down the rear sight will drop free. Both of Jim Fuller’s AK armorers DVDs include details on how to remove the rear sight and both are highly recommended by us. SI does not include details on how to do this in their instructions or if you should remove the sight leaf which we assume you should. 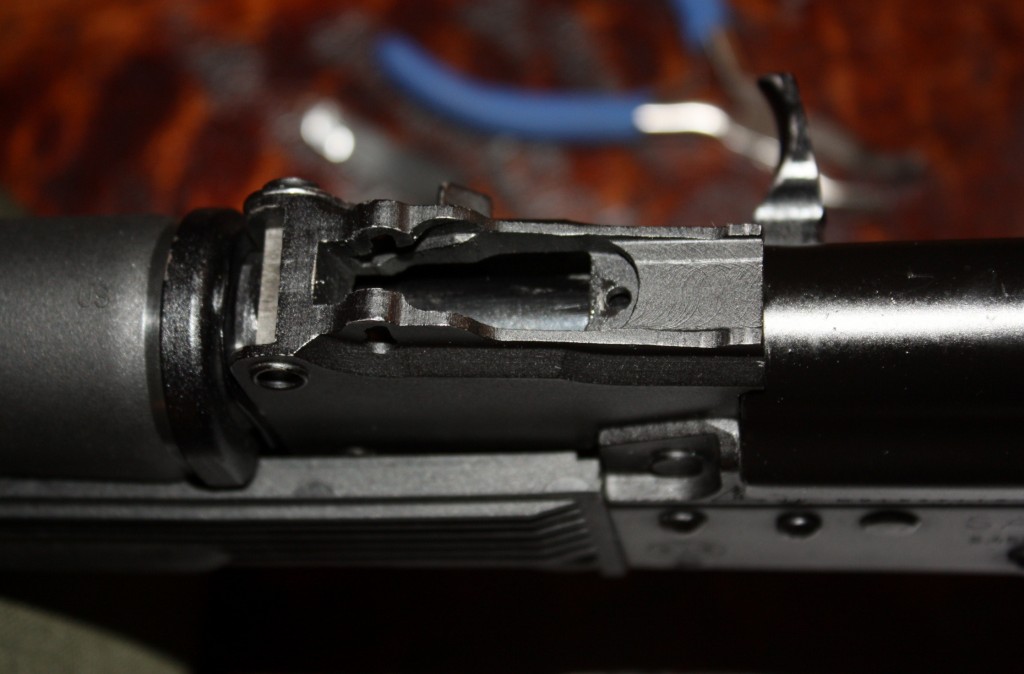 Once you have pulled the rear sight off you install the 3 leveling hex set screws about halfway into the rail. From there, mount the rail and install the horizontal mounting screw through the rear sight mounting holes and screw on the locking nut. Then all that’s left is adjusting the three leveling screws for level.

The rail is rock solid once installed and I would see no issue putting this on a battle rifle, I would suggest Loctite to help keep those screws seated over time. For this install we used a Bushnell TRS-25 (excellent red dot for the money) which mounted up perfectly with the SI rail. The rail gives you a lot of room for a red dot, so much so that you could do some creative mounts with other optics if you were so inclined. 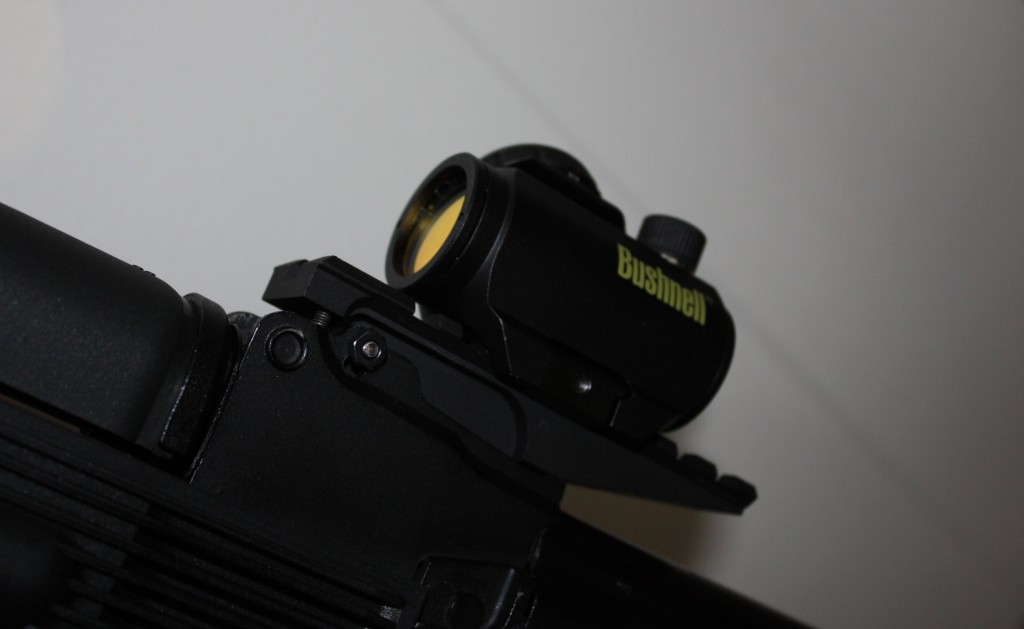 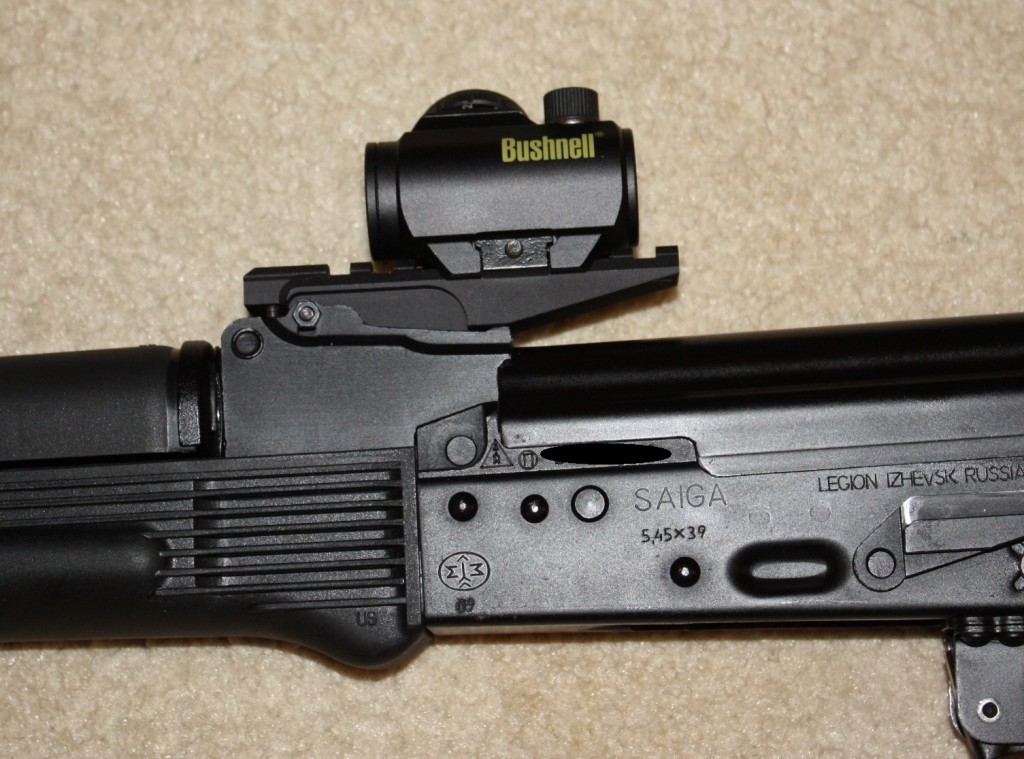 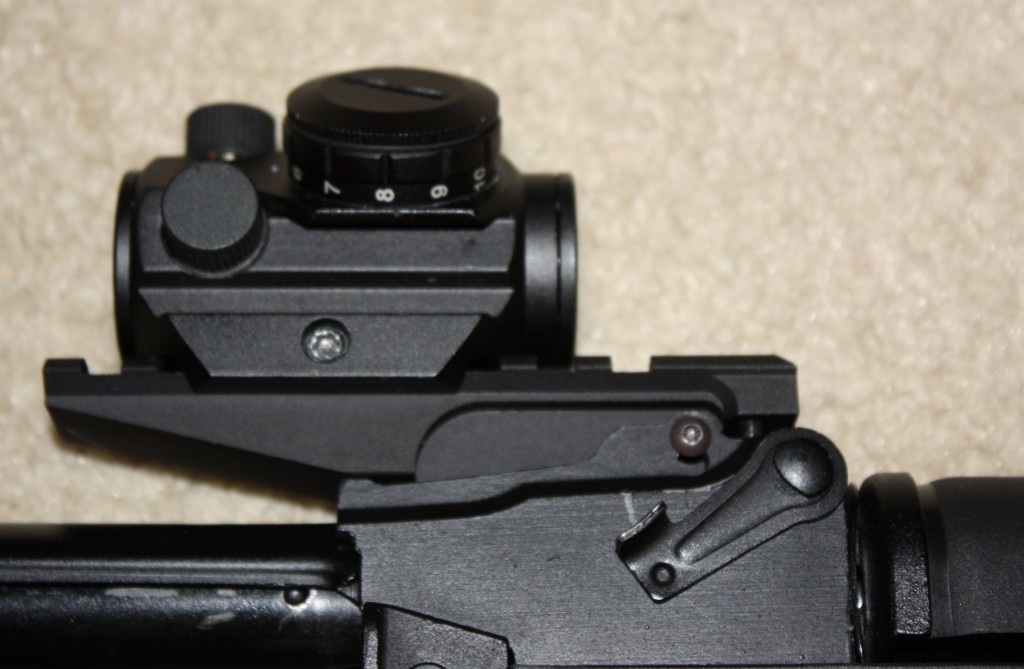 Going back to what I was saying in the beginning of the review, I was not thrilled to be moving the micro red dot up front but I have to say, when it was all installed the dot handles like a dream. I was amazed out how “lively” the rifle became by moving the dot up front.  Sight acquisition was super-fast without a loss of situation awareness. We have put about 800 rounds through the SGL since we put the Strike Industries on and I like the setup a lot.

One really nice feature of the rail is it can double as an iron sight. They call it an “aiming reference gap” and it is located in the gap of the rail. SI has included two dots at the end of the rail that you could paint white or orange if you desired to aid in using the gap as a rear sight. This is a nice option to have as a backup and actually helped me out a lot sighting in my red dot. The TRS-25 I have was on a Beretta 12 gauge slug barrel and needed a lot of adjustment to get it on paper. Foolishly, I didn’t use a laser bore sight before I took it to range for the first time. I was able with the use of the rear sight gap to see where I was off and quickly dial the TRS-25 on the target. The gap really works and I would have no issue using it if my red dot was obstructed with debris. 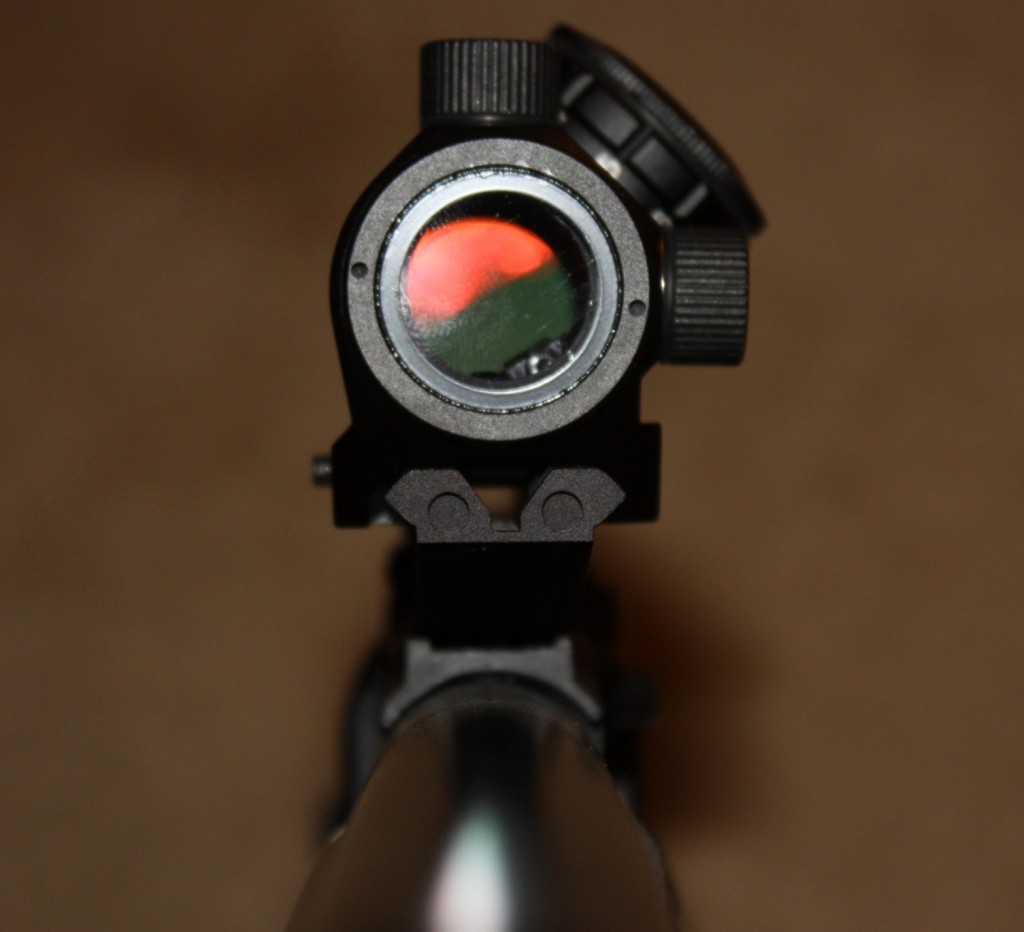 The only issue I have come across is the SI rail seems to not allow you to take the gas tube off on the SGL-31 as it blocks the throw lever. You mileage may very here based upon the variant of AK you have. In the end I don’t see this as a deal breaker as I rarely take my gas tube off for cleaning anyways. I know that some will freak out as most 5.45 x39 rifles generally shoot corrosive ammo (we shoot a lot of it) and cleaning the gas tube is a must, I think there are easier ways to do it as outlined by MAC in his “Corrosive Ammo and Cleaning Your Rifle” video. 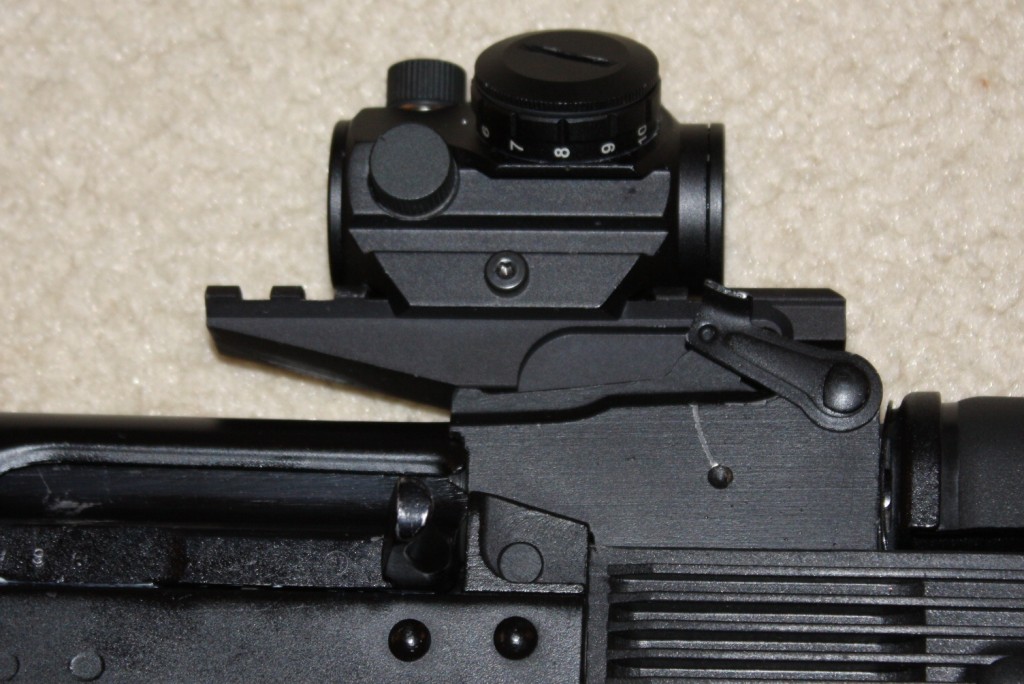 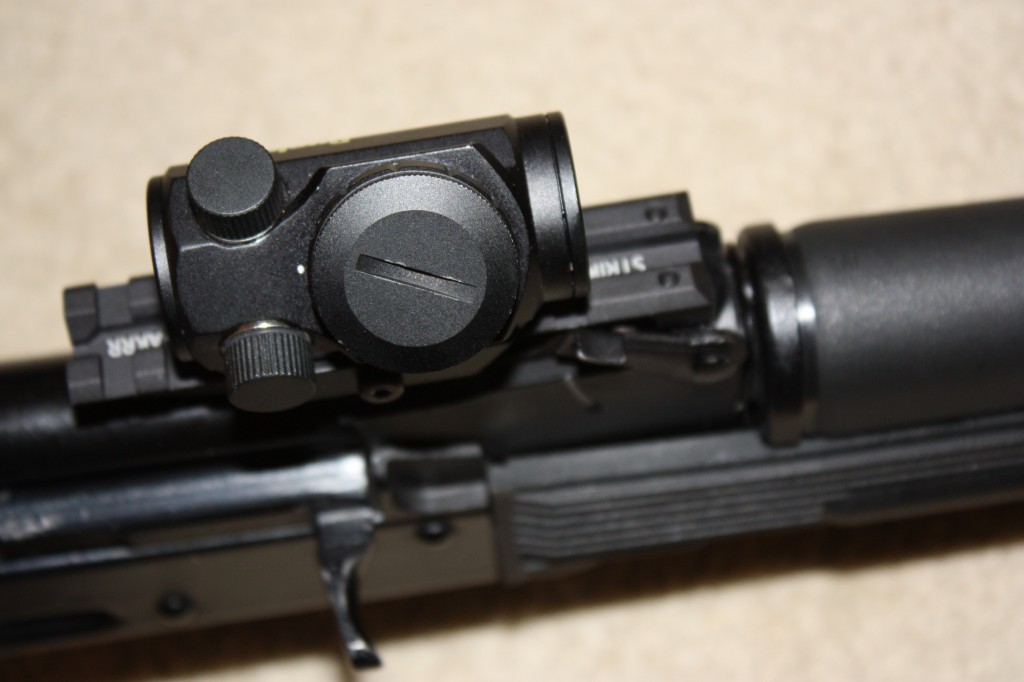 Throw lever is blocked by the rail

Another little secret with corrosive ammo; if you shoot half a mag of non-corrosive before and then the other half after you shoot corrosive, you can clean your rifle like any other rifle shooting any other ammo. It seems to lay down a good base and then blow out the salts after shooting the corrosives. I have had no issues with rust since I started this system and have even gone weeks without cleaning to test it.

Anyways, the Strike Industries AK Rear Sight Rail is a solid product that I would happily use and there were a few at my range that wanted to, and will, pick one up. Like I said at the beginning, I was a doubter and to SI credit, when they contacted us, they said shoot the hell out of it and let us know what you think, even if you think it sucks. That means a lot, it tells me they have faith in their product and are not afraid to hear negative reviews. 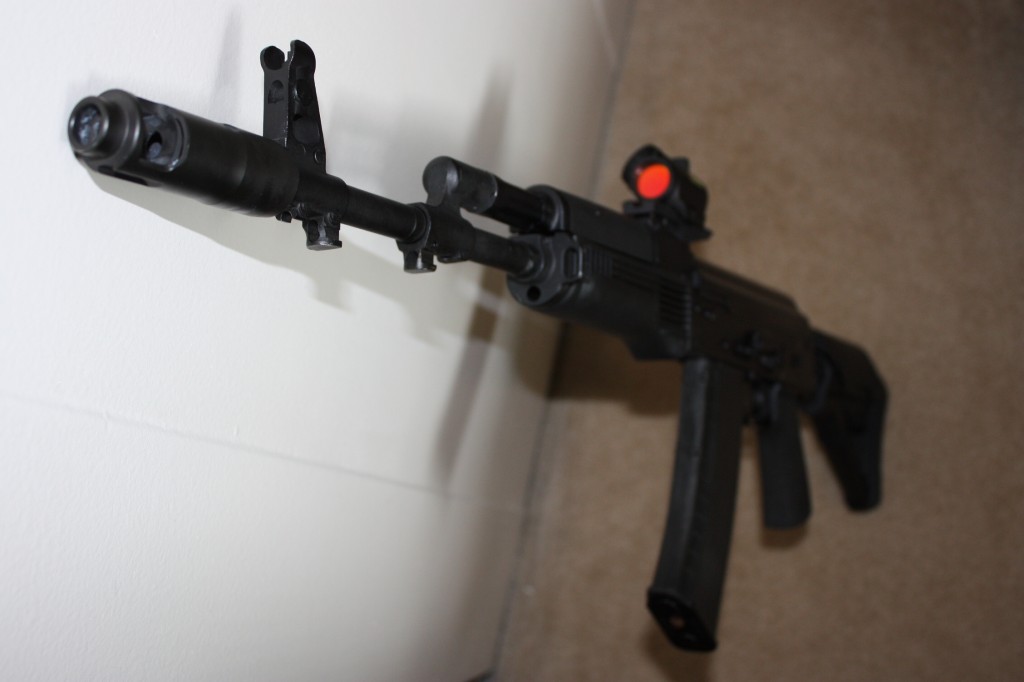 You have a couple of options if you want to mount a micro red dot onto an AK these days and more seem to pop up every day.

For the price I think the SI rail is a no brainer. It’s also a third of the price of the Samson AK47 Rear Sight Rail which I think is SI’s closest competitor. If you want to mount a red dot on your AK (which we highly recommend) and don’t feel like spending a fortune (spend it on ammo or training) then you can’t go wrong with the Strike Industries AK Rear Sight Rail. It’s a rock solid, inexpensive, battle ready product that holds zero and is easy to install.

AK47 Talk also has done a great review of the SI AK Rear Sight Rail. Have a look at it HERE.