The 300 AAC Blackout. The new tactical flavor of the month the old timers would say and for the most part they may be right. But these are also the guys that said red dots on rifles were a waste of time and now say that about red dots on handguns.

300 Blackout is an interesting animal. For what it was designed to do it excels. For those trying to make it the new do all cartridge, they generally don’t know anything about ballistics or barrel lengths.

Let’s start with what it was designed to do. The cartridge was developed by Advanced Armament Corporation (AAC) for use in the M4 carbine. The purpose was to achieve ballistics similar to the 7.62×39mm AK cartridge in an AR-15 while using standard AR-15 magazines at their normal capacity. Specifically: 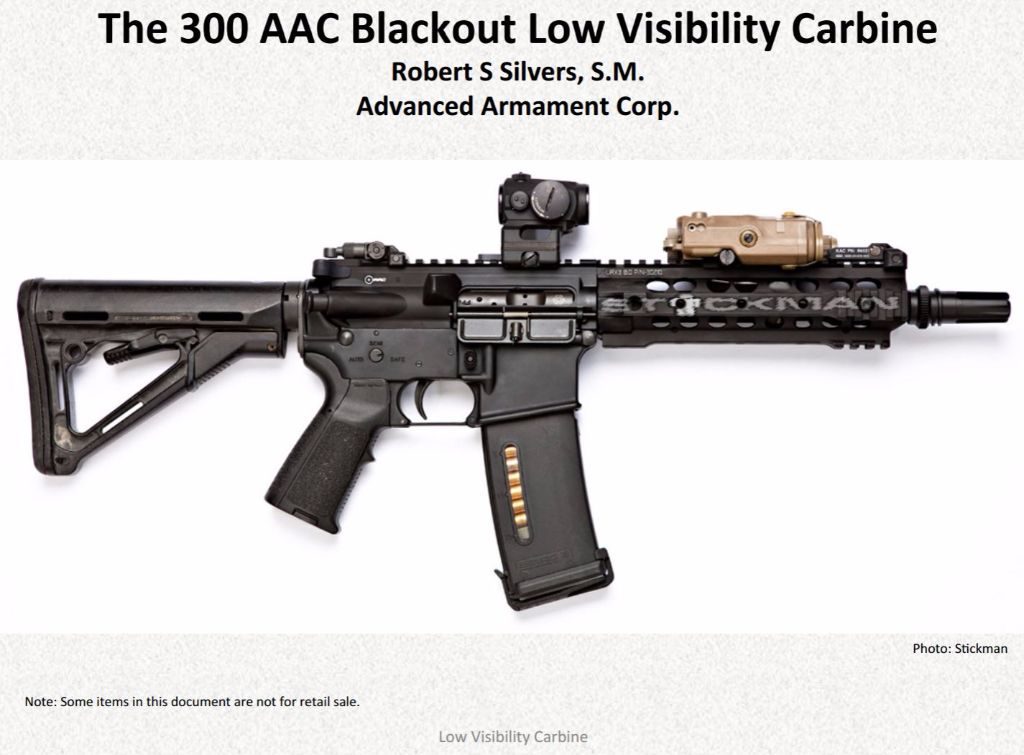 Under 16 inches the platform uses a pistol length gas system. That, along with its lower pressures, make it an ideal platform for short barrel rifles.

What AAC ended up with was a very quiet round (as quiet as a HK MP5-SD) when using subsonic ammo and a suppressor that could also switch to a very powerful 30 caliber supersonic round with only the change of a magazine. As mentioned above, the round excels in short barreled applications. The platform uses all the existing pieces of the M4 weapons system (Bolt, BCG, Magazines, lower, upper, handguards) with the only change being the barrel.

So if you are looking for an SBR under 10” that will cycle reliably and have limited blowback when using a suppressor, 300 Blackout is the natural choice. The rounds development received its SAAMI certification in 2012. At the end of 2012 Travis Haley put out this video about his experiences running 300 Blackout:

The rest of this is going to be my opinion after shooting thousands of rounds of blackout in several different configurations and studying it since 2012.

If you are looking to build an SBR and want a barrel under 10″, personally I think you should go with 300 blackout. 556 under 10 inches has historically had issues with cycling although as of writing, some upper manufacturers are starting to work out those kinks, especially in piston guns like the PWS. At the end of the day the 556 round needs velocity to be effective. At 7.5″-9″ the round has lost so much velocity that unless you are at very close ranges you will be just penciling your target (the round is not expanding or fragmenting).

300 Blackout on the other hand is designed for slower velocities and the Barnes 110 grain Black Tips are excellent at expanding out of short barrels. Which leads us to range – In my opinion 300 blackout is best served as 300 yard max with supersonic ammo like the Barns and 100 yard with expanding subsonic. You need to do the work and research here to see if your preferred short barrel length will match those estimates. I know someone reading this has a gun that they can hit milk cartons at 800 yards with their blackout, I get it, but that is not the norm.

I think in the 5″-7.5″ barrel length you’re pushing it, and those are better as 150 yards and in guns. Generally as a replacement for a subgun which it excels at (topic for another day). After 9″ I think you’re good to go. Again, this post is a moment in time and technology on this round is moving very quickly so don’t take any of this as gospel.

The round is also very quiet with subsonic ammo. With the right suppressor and the right ammo (and probably an adjustable gas block) it can be 9mm subsonic quiet. That being said don’t think you are going to get an 8″ off the shelf 300 Blackout, a 30 cal suppressor and a few boxes of Remington subsonic 220 grain ammo and it’s going to be all that quiet. It’s not, especially from the shooters ear as the AR action has a bit of a bark. If you are interested in making the round very quiet I would recommend doing research over at 300blktalk.com.

So if we put all the pieces together, we get an SBR that is short and with a 30 cal can on the end is as long if not shorter than a 16″ gun. This makes it an excellent choice for home defense, urban environments, hunting in the eastern woodlands where 100 yard shots are hard to come by, or as a great backyard gun for plinking and not disturbing the neighbors.

Some good articles to check out: