I have had my RMR Glock 19 that was milled out and refinished by ATEi for over a year and a half now. At this point I have at least 5 thousand rounds through it, although i’m not really keeping count. I promised an update on this a while back and if you want the quick and dirty I am very happy. 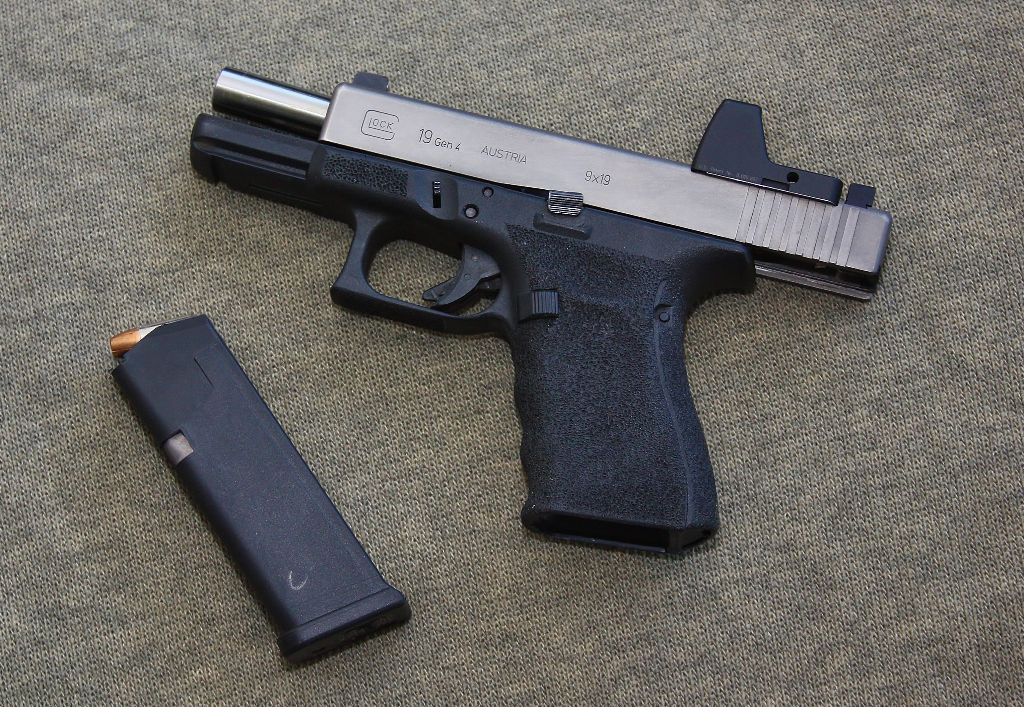 You have a number of options when you send your slide off to Doug at ATEi. You are going to send him your RMR as he fits its exact to your slide (more on this later) and then you decide how you want the slide finished. At the time I think you had three options – he could send it back to you unfinished, refinish it in back to the Black Nitride (Melonite/Tennifer) finish, or he offered a Nickle Boron coating. Doug was super helpful though several emails on what finish to choose. He remarked that he had a lot of luck with the Nickle Boron and he had done that finish on his carry gun. For the money I think this is a steal so I went with the Nickle Boron.

Turn around at the time was about 6 weeks. Mine went a little long as there was a backorder on suppressor sights which you need to clear the RMR. The slide came back to me with excellent attention to detail. The RMR fits exact. ATEi does things a little differently in that they add two milled out posts that help index the RMR which helps hold zero when you take the RMR off to change the battery. The posts are also helpful in locking the RMR down to the slide. Check out this video of ATEi beating the crap out of this RMR slide combo.

Next thing I noticed is the nibx Nickle Boron coating. I didn’t know what to expect here and I really like the way it turned out. The coating is so thin that you pick up all the details in the slide. The finish is not shinny. The best way to describe it is it has the same glisten for lack of a better word that a factory GLOCK slide has. I also thought the color would be like an AR bolt carrier group with Nickle Boron coating. It’s not that silvery. It’s kind of a matte silverish grey.

After carrying it every day for a year and a half there has been no issues with the nibx coatings durability. It has been rock solid and has no impact on the guns reliability. The nibx has been very helpful with cleanup as carbon just wipes off for the most part. There is some holster wear but it just shines up the slide a little. The same as a standard slide with holster wear. The black anodized finish on the RMR has taken a bit of a beating from belt buckles, shell casing hitting the RMR and just knockings into things. All and all the gun as a whole has been rock solid.

I purchased the RM02 RMR with the 6.5 MOA dot. The RM02 has a light sensor that auto adjusts to the ambient light around it. For that reason it does not have manual adjustments and is always on. About three or four months in the RMR had to go back to Trijicon as the dot would go on and off while shooting – not good. In chatting with the guys over at Trijicon they just do a full electronics swap. I have not had any issues since getting my RMR back from the mother ship. Battery life on the RM02 is supposed to be 2 years. I’m not seeing that. I’m getting 8 month to a year. I don’t really care but it’s a slight pain in the ass because you have to take the full unit off the slide to change out the battery. Then you have to confirm zero. I have a buddy who has a pre milled slide and ATEi’s slide holds a much better zero with those posts I previously mentioned in the milling. His is way off when he changes his battery. Remember screw + any gun = Loctite.

The RM02 uses a 6.5 moa dot. If I were to do this all over I think I would go with the 3.25. I wanted the larger dot for 10 – 25 yard applications but once you see how easy it is to hit steel at 50 – 100 yards you will want the smaller dot. My other thought was a larger dot would help with dot acquisition. Unlike a rifle you don’t have the cheek weld to put the dot in your line of sight. On a handgun you index off the iron sights. Once you figure this out, it just becomes natural and you will get the dot with every draw. 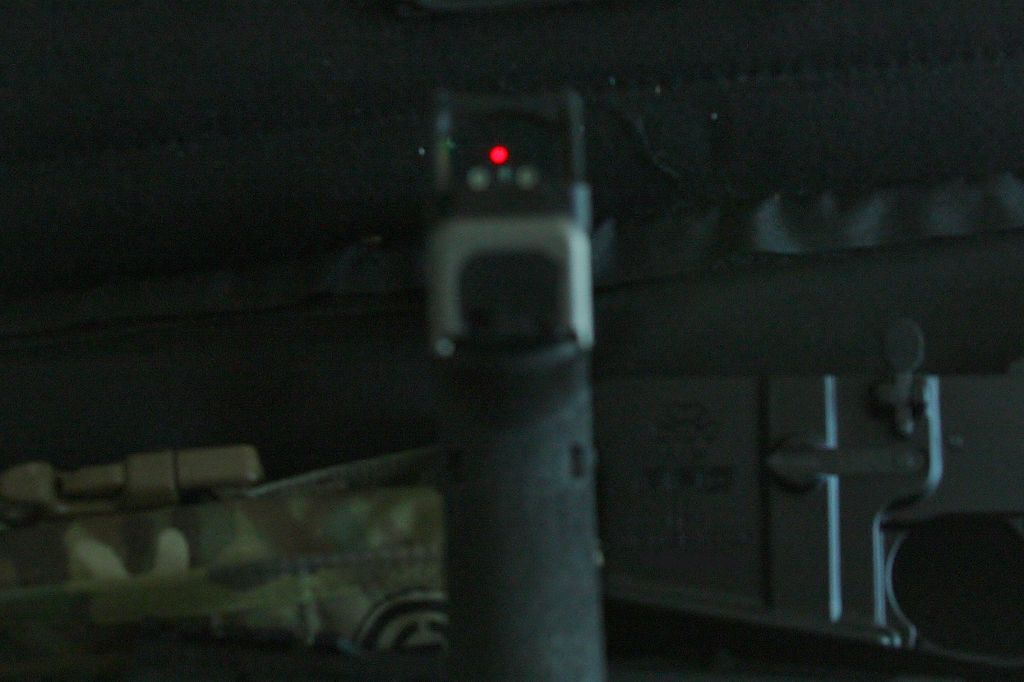 Because of what I just said on how you index, I’m a believer in having the rear sight behind the RMR. The reason for this is how you shoot a handgun. There is nothing different except there is an RMR in the middle of you sight. Line up your sights like you always do and in your line of sight is a red not. Having the rear site in front of the RMR does not seem natural to me but I’m sure you get used to it.

I get a lot of questions about rain and fog due to extreme temperature changes like moving from AC out into humid summer heat. On the rain, if you coat your RMR with Rain-X this will greatly mitigate this issue. I did an AK class with the RMR 19 as my sidearm and it rained all day with no issues.  In regards to fogging up, I have never seen this issue but I have read about it. The Rain-X may also be helping here also.

So what do I think after having an RMR equipped pistol for over a year and carrying it every day? I think it’s a huge tactical advantage. I am not one of those guys that stereotypes shootings in that they will be in 3 to 7 yard range. I think this is complete BS. If you are shooting over 10 yards or while moving the RMR is the same as having a red dot on your AR. It’s much easier to get shots off.

I have had no issues with concealment or reliability. Holster availability is much larger now than when I started, and in my experience all you need to do is ask. It may not be on the holster maker’s website but chances are good they will do the cut out for you. Raven Concealment has been excellent with this. My only regret is that I did it on a Gen 4 and my new GLOCK 26L is a gen 2/3. I would love to throw the RMR slide on the 26L frame. I think I will end up picking up a gen 4 frame and cutting it down. The more I use that 26L it really is a perfect fit for me.

So is it cool – Yes. But not as cool an AAC 9 inch MPW with a suppressor :). In the end I treat my guns like tools and this is just a better tool. I also don’t baby my guns, I throw them around and don’t clean them all that often; I guess that’s why I like GLOCKs and AKs. I want them to break now when I don’t need them vs when I do. This system of a GLOCK with an RMR on it is rock solid. This is the future of sights on handguns, anyone who says different are like all the old guys that used to bitch about red dots on rifles and look where we are now – most rifles have red dots. Do I think the end solution will look like this, no but I think we are close. They need to find a way to put the battery on top so you dont have to remove the whole unit to change the battery out. A QD mount of some sort would also be helpful. Bottom line; through all my research and having now owned the end product for a while I can’t recommend ATEi enough. They did an absolutely stellar job.

If you’re not a believer, thats cool. But if you get the opportunity to shoot an RMR equipped pistol do it, it may change how you look at handguns.