Part one of The Tail of the AK.

So I’m in, I want to get a middle of the road AK-74, preferable a folder so it’s easy to transport. If the SHTF I just want to be able to throw it in a duffel or bug out bag and bail.

Under the middle of the road AK-74s you have a lot of choices. One thing I knew is I was going to put a rail system on it. The AK in my opinion has some fundamental issues with ergonomics that an AR just excels at. It does appear that the landscape is changing though and tactical companies in the space see this as a growth sector so new and exciting AK accessories are coming to market every day.

This brings us to the M10 from M+M. Looks to be exactly what I was looking for; a folder with forward rails that from my research appear to be decent. It looks like they are Romanian WASR models that a little more care was taken to build them out correctly. The M10 seemed to answer all my needs and I wouldn’t have to spend extra to pick up the accessories I wanted. It looked to be good to go right out of the gate.

As I mentioned in Part 1 Atlantic Firearms has a good reputation for taking care of their customers. It looked like in the past if there was an issue they acted as a liaison between you and the manufacture. This is actually a big deal; if you buy a firearm and it doesn’t work, generally it’s not the problem of the store that sold it to you, especially online. Nine out of ten times they will point you in the direction of the manufacture, who will ask you to ship it to them and give them a couple of weeks to fix it. This sucks, because you just got a new toy and it doesn’t work and now you have to wait two to three weeks to get it fixed = not happy. Then you always have this doubt in the back of your head about that firearm. Most of the time they get sold or traded to a gun shop for a replacement.

From the looks of it on the AK & AR forums, Atlantic has actually replaced firearms that customers were having major issues with. This is a big deal and should not be taking lightly when determining who to purchase a firearm from.

So I decide on the M10 and I was going to get it from Atlantic. This is not my first online firearms purchase but it was my smoothest. Their online ordering system is strait forward. The FFL page was great and my local shop was already in the system so I didn’t need to do anything but click on the name. It shipped the next day via FedEx ground and due to my proximity, arrived at my FFL the next day. So I ordered it on a Wed night and it was at my FLL Friday afternoon – can’t beat that.

My FLL calls me up Friday afternoon for the pickup and I was ecstatic that it was such a quick process. I roll over there a little later on and find the gun in good shape. Trust me, buying a middle of the road AK is not like buying an AR. An AR will be nicely finished and anodized with no milling marks. It will be like any other gun that you would buy new. The M10 was not like this at all, there were milling marks all over the place and the finished was scratched up in a couple of places. This is not to say I didn’t know what I was getting into, but a Ruger 10/22 has far better fit and finish then this M10.

My FFL had an Arsenal AK-47 on the wall that I took a look at while I was waiting on the paperwork and it had a much nicer finish overall. But after looking at it I was still very happy to get a folder and a forward rail for half the price.

I head home to lube her up before I headed out to the range. When I opened up the M10, the guys at M+M did a great job of cleaning up the inside and oiling her down. I don’t think you would have any issues shooting this AK-74 right out of the box.

Looking the M10 over, the reviews I read were spot on. It had a very good front rail system, the Romanian folding stock was great with no slack or wobble. It locked perfect against the right side without obstructing the bolt and could easily be fired with the stock folded. The muzzle break looks like they toned it down a little from the Tapco that is in the pictures on Atlantic’s site. The action was smooth and seemed like it would break in nicely after a few hundred rounds. 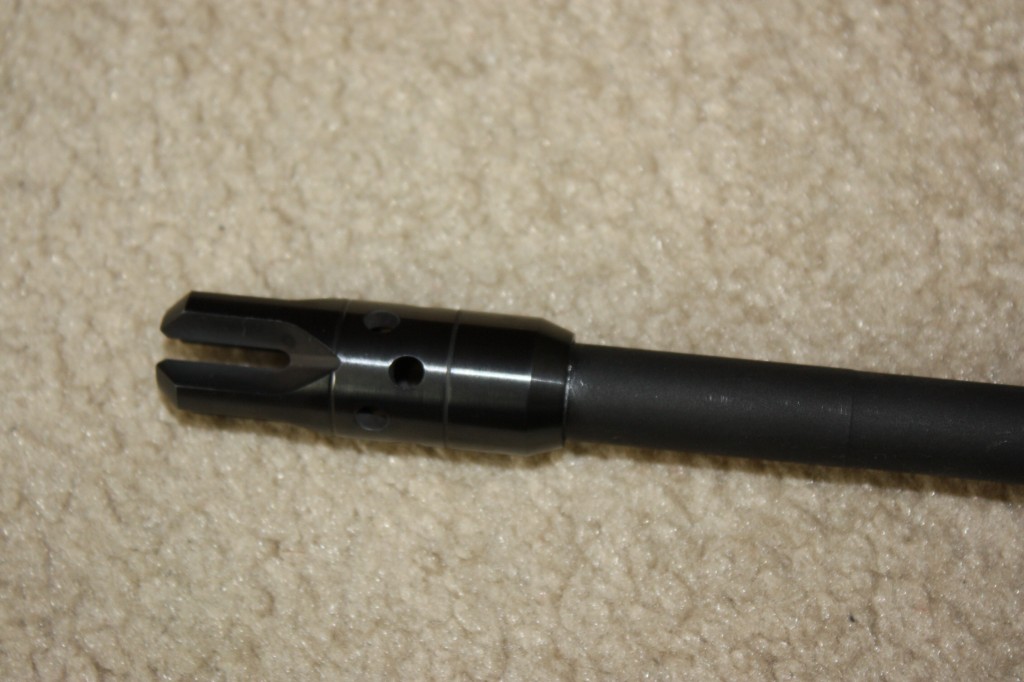 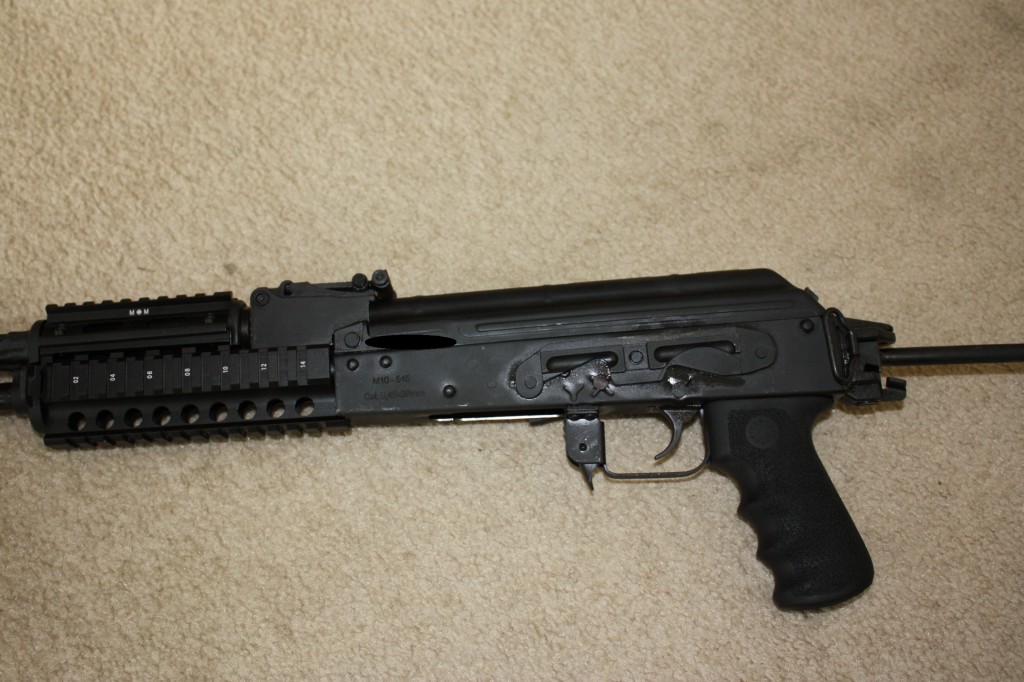 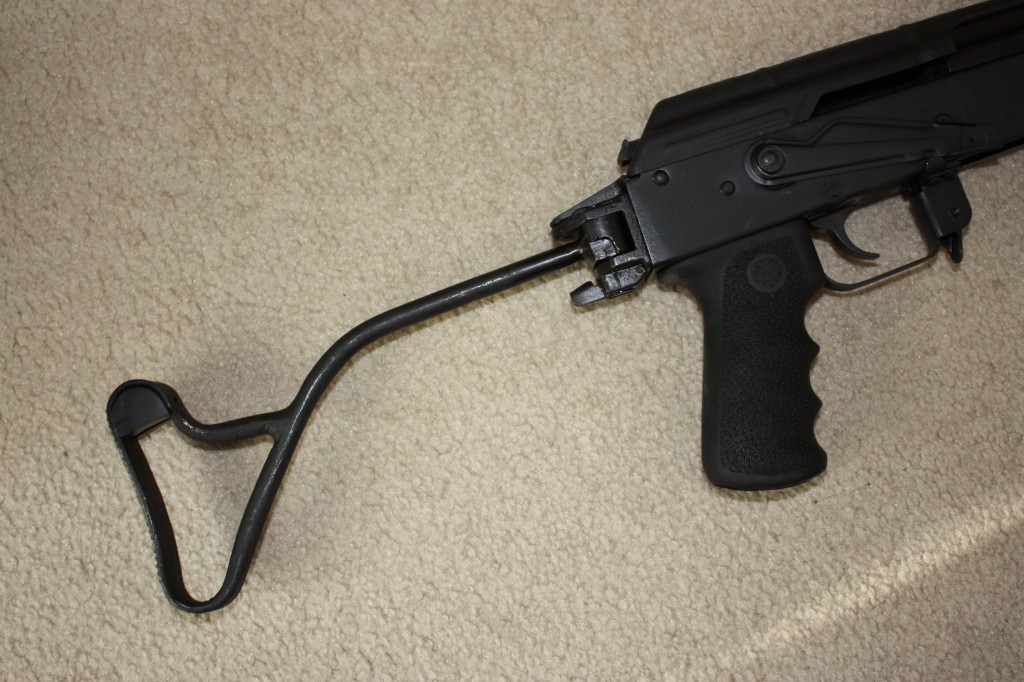 Everything was strait and level on the M10. The magwell had a lot of wobble and the M10 does not have the traditional AK dimples to hold the mag snuggly. It has a Tapco G2 trigger installed in it to meet US compliance laws. This is a great trigger, very crisp and just the right amount of pull. I would highly recommend it to be added to any AK looking for US parts. For $600 I was a happy boy. The finish leaves something to be desired but not something that couldn’t be redone on a weekend. The M10 would look great with a coat of Guncoat on it.

After a good wipe down and lube job I was off to the range to put some round downrange. Because of the speed of Atlantic I was behind on some extra mags I ordered and also some surplus ammo. I was very lucky in that my range actually sells the 5.45×39 round from wolf. They have a rental AR that uses that round so I would have plenty of ammo if I wanted to stay all night. The M10 comes with a really crappy mag. Clearly this is where they chose to save money, which I didn’t mind as I had more on the way and the M10 makes up for it in other ways.

I get to my lane at the range and load her up. Bam, Bam, Bam, JAM – WTF?? Clear the jam, it’s a failure to feed another round into the chamber so you have to take the mag out to clear the round. Try again Bam, Bam, Bam, Bam, and then another JAM. WTF??? I can’t tell you how frustrated I was. 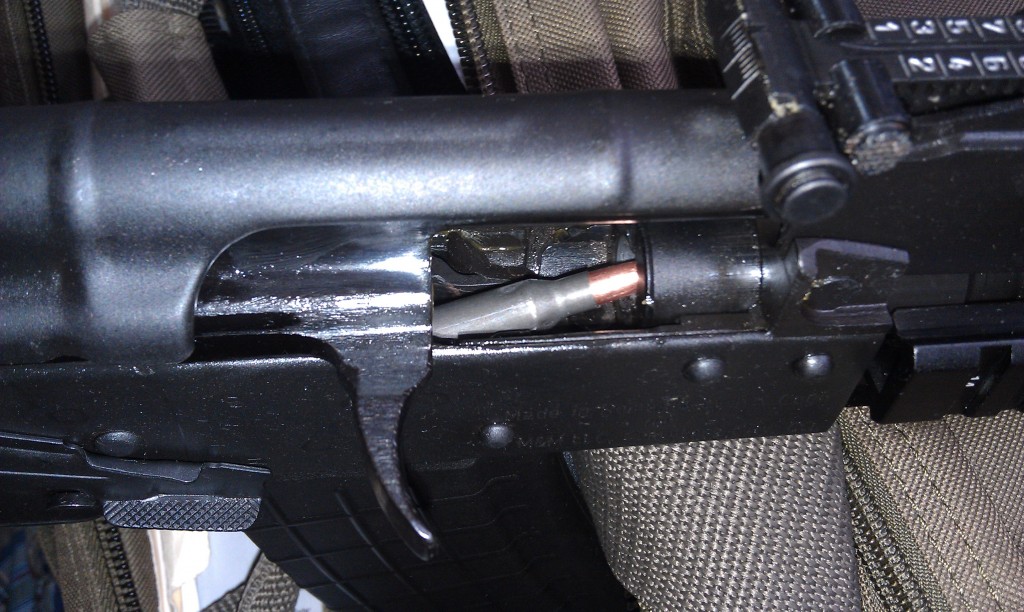 This went on and on for about an hour as I tried everything I knew to try to fix the issue. I think it was an even split between rounds that got messed up in the jam and actual ones that fired. I was so pissed. I spent some time with my GLOCK and promptly left the range. I looked at my watch and it 6:30pm. There is no way that Atlantic is open, it’s a Friday so there is no way I am even going to speak to a person before Monday. Again supper frustrated and pissed. It’s an AK! It’s supposed to be the GLOCK of rifles. Clearly M+M missed the memo.

I quickly fire off an email to Atlantic and leave a message on their voicemail. I get home from the range totally bummed.

8:30 that night I get an email from Blaine at Atlantic:
“We will contact you on SAT via phone to discuss, do not worry, any issues will be dealt with we have sold hundreds of these rifles & this is the first issue reported on the AK74 series. We will repair, replace or refund and pay any refund ship etc. It is 8 pm on a Friday night and our office has been closed for several hours I will be in touch with you on SAT to get the issue figured out.”

Can you say ROCK STAR! I couldn’t believe it.

Saturday rolls around and Blaine gives me a call. We went over the issue and both agreed that there wasn’t much we could do over the weekend. Generally with magazine fed weapons the magazine is the first failure point. I told Blaine I had more mags on the way and should get them next week. He asked me to load a mag and pull back on the mag as I cycled the weapon manually to see if that would work. He was correct and the gun cycled perfectly but if you let off the mag it would Jam after two rounds. We decided to hook up again after I got new mag and he would contact M+M about the issue on Monday. I can’t tell you the weight that fell off my shoulders after that call.

There will be a part three to this shortly. I’m just waiting on all this to play out and will give a full review of Atlantic, M+M, and whatever the solution is. I in no way have hinted to anyone involved that this gun was for a review. I wanted to give you a clean explanation of what went down and how the rifle performed. More to come in part three.