We have seen a lot of cool items come across our desk. Some for firearms, some for survival and some that are just brilliant. The M-Sharp Sharpener by Swiss Bianco is one of those truly brilliant items. 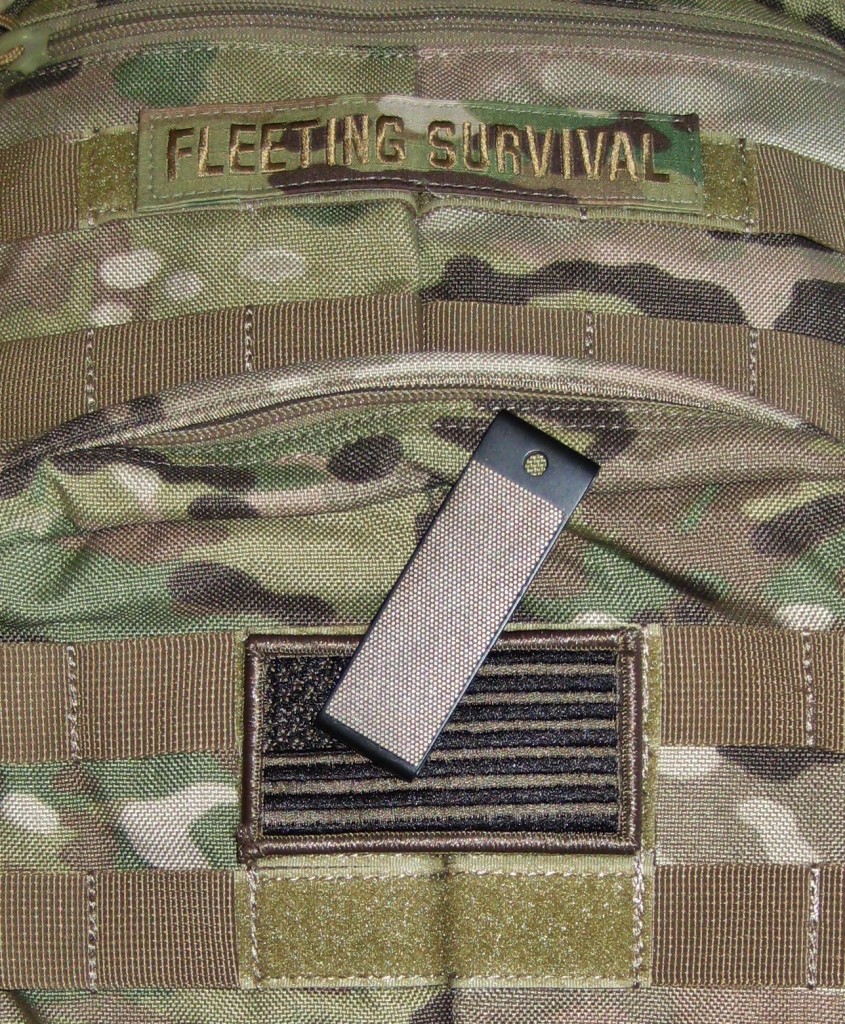 The M-Sharp is a diamond sharpener much like our beloved DMT sharpening stones that use impregnated diamond dust to sharpen even the hardest steels. The M-Sharp uses a very similar diamond sharpening pad to maintain an existing sharp edge while in the field without the use of oil or water.

Where the utter brilliance lies is in the form factor of the sharpening pad. The diamond sharpening pad is attached to a thin stainless steel bar. The ends of the bar are curled over so that they can wrap around Molle webbing. The fit is rock solid between two sets of webbing and we experienced no movement over months of testing. 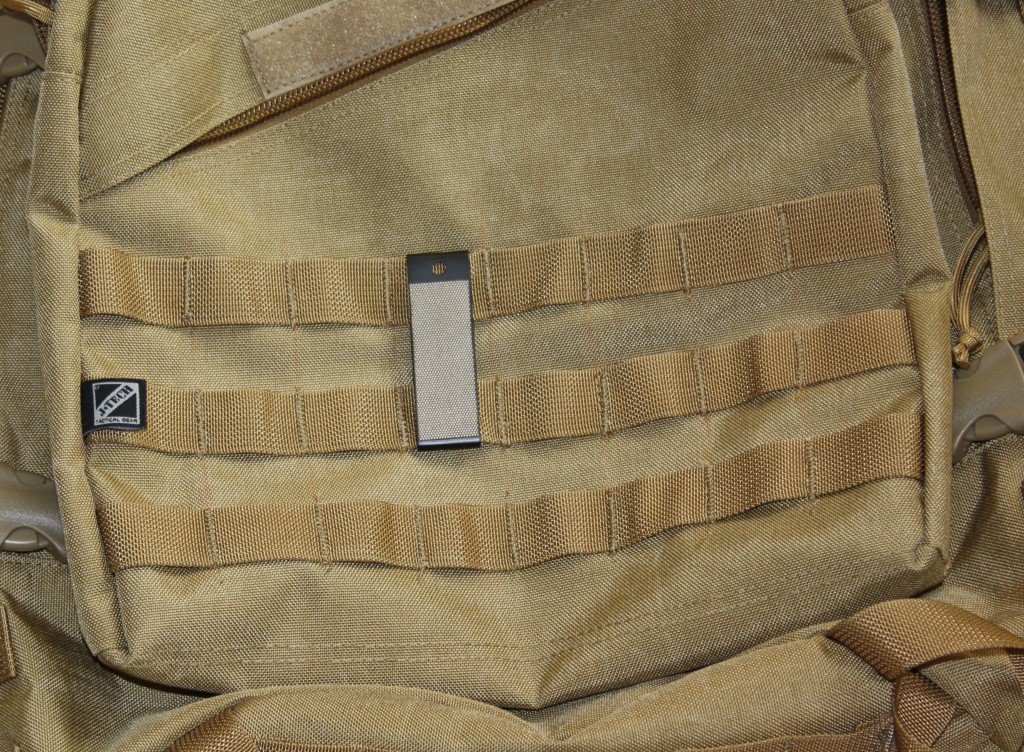 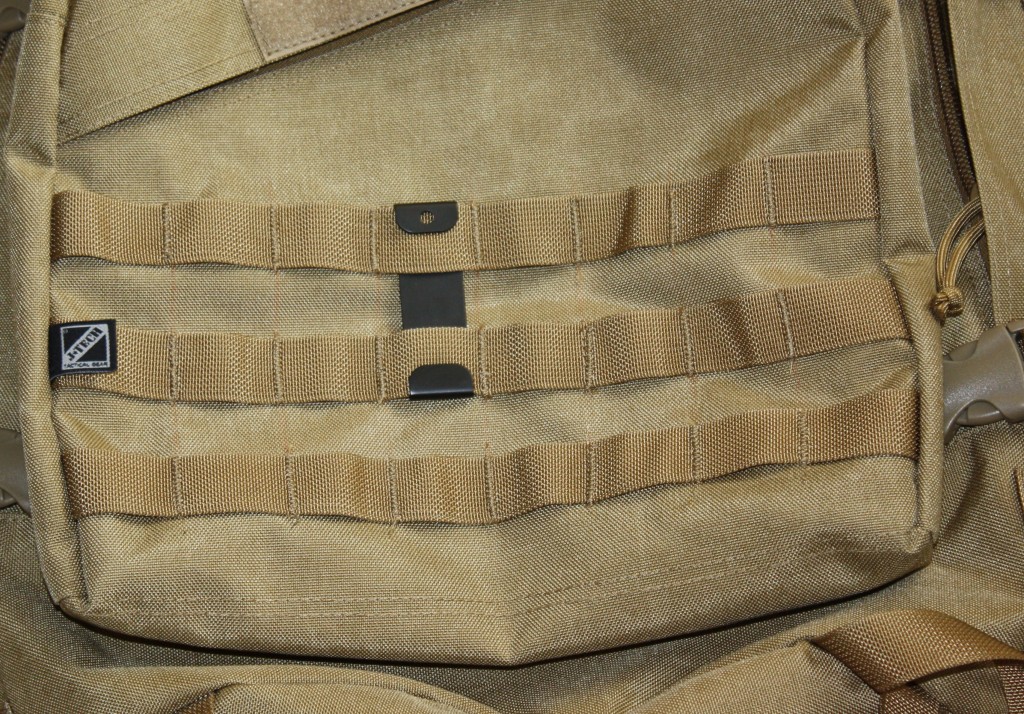 When not in use, the sharpener’s diamond pad can be attached so it faces against your pack or other Molle gear. This is great for two reasons; one, it doesn’t knock into or scratch things if on a pack via running into walls or dropping your pack on a floor and two, It protects the diamond pad from damage. When in use you can flip it around and attach it to the Molle, rest it on a solid surface or use it in your hand.

Swiss Bianco sent us a M-Sharp for testing and to really wanted to see what it could do. We attempted to sharpen a crappy NRA knife that you get for being a member. Although the knife has a nice action it came to us ridiculously dull and didn’t even seem worth our time to try to put a decent edge on it. 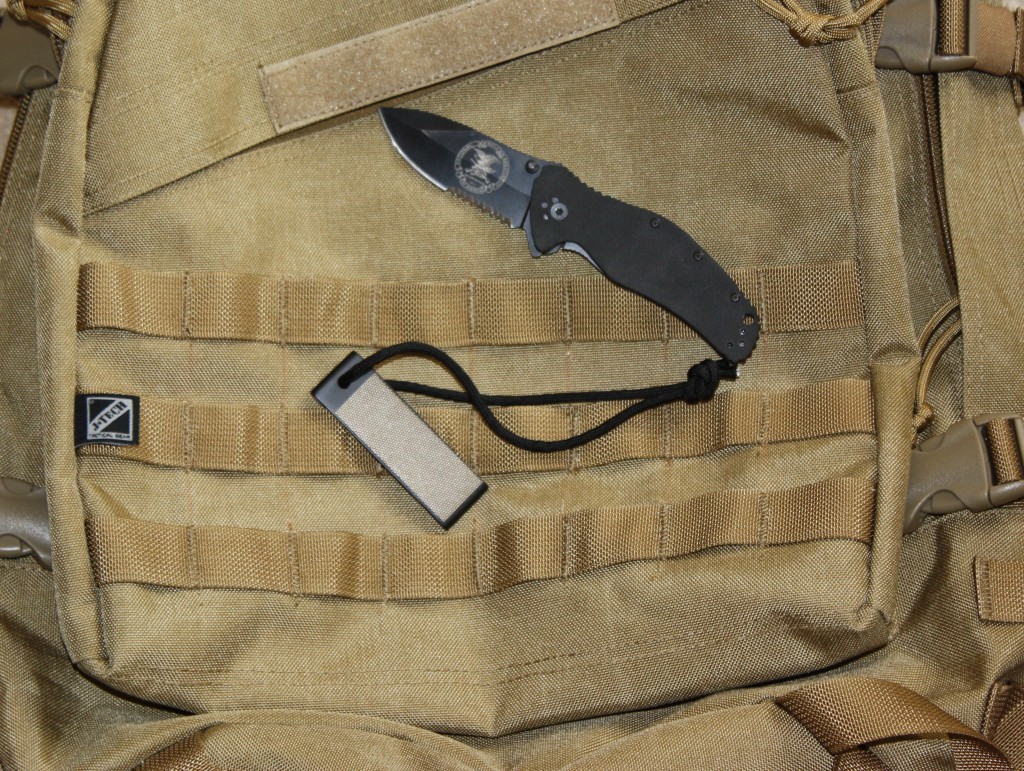 Although on Swiss Bianco’s website, they express that the M-Sharp is designed for touch ups, we felt putting a solid edge on a dull knife would be more in lines with what Fleeting Survival is all about. Two things we were worried about in this test would be if it was long enough to be able to get the edge in place and if you would be able to hold the M-Sharp stable enough because of its size to get a good degree of angle.

Although it probably took longer than it would with a full size DMT stone, the M-Sharp did an exceptional job on such a dull edge. We were blown away with how well it was able to get an edge on the knife. The grit on the M-Sharp is somewhere between fine and medium but can get you to a strop-able edge very easily. Its comparable to a DMT fine stone for reference. 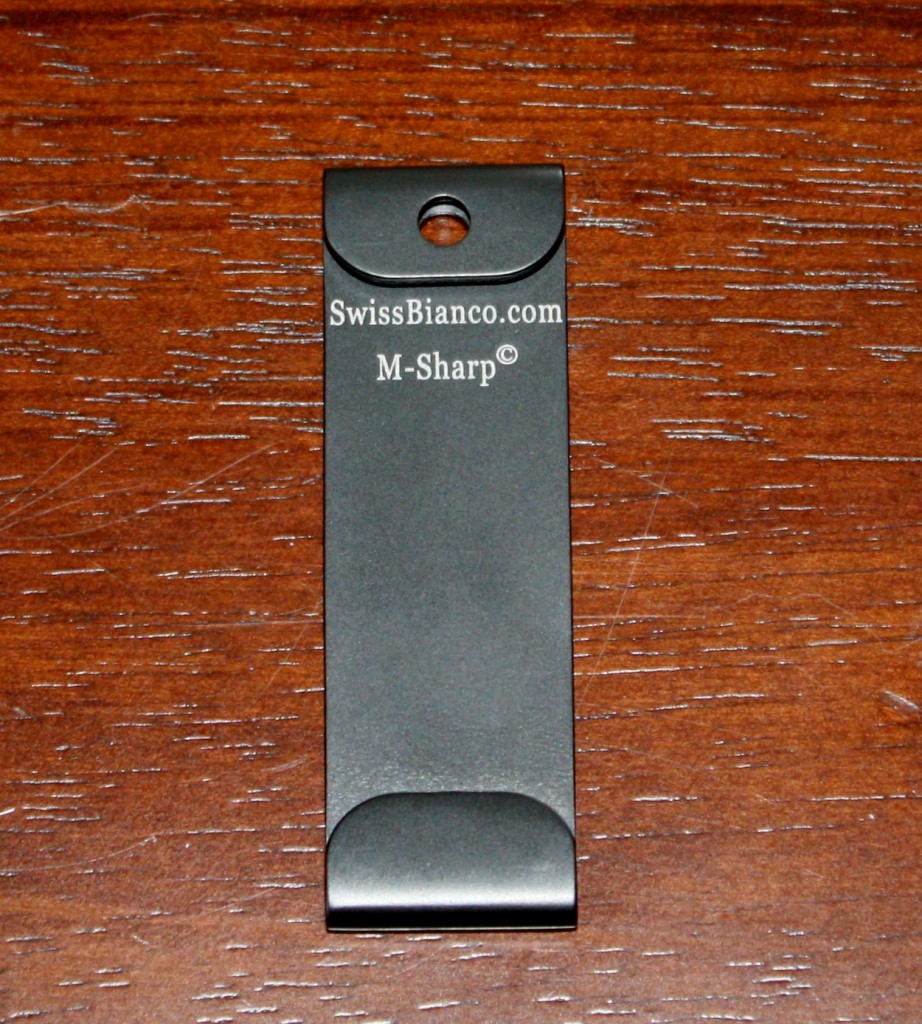 This would be a killer item to have on all your Molle gear both for day-to-day use or in case of a SHTF situation. We would have no issue using this as our primary form of sharpening and because it only takes up one slot of Molle we plan on getting a bunch of them. The M-Sharp is perfect for any Molle pack you have or even a Molle battle belt. 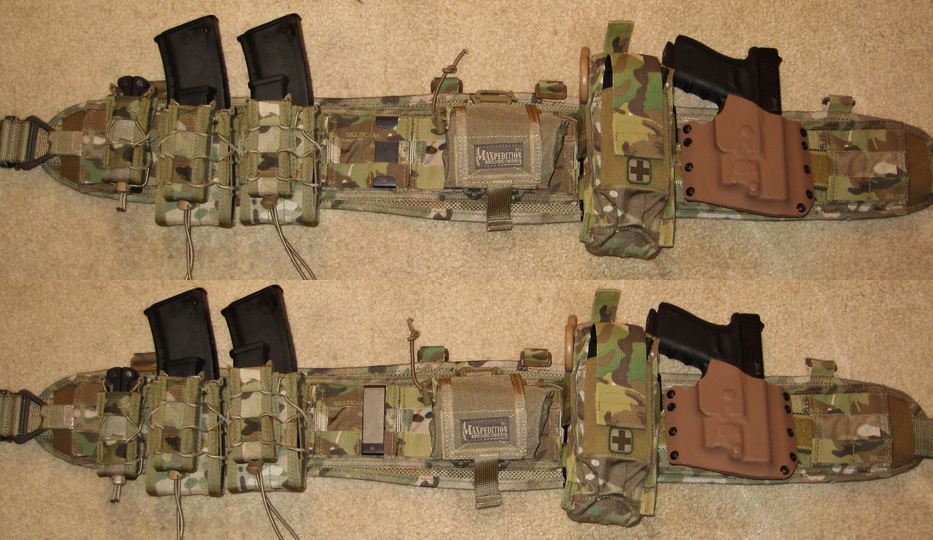 The M-Sharp was one of the many tools that went with us to East Africa. The M-Sharp is awesome for travel as we already use Molle packs most of the time and it weighs only 1oz. You don’t even know its there unless you need it. It did a killer job on touch ups both on fixed blades and multi-tool blades that don’t tend to have the best steel. 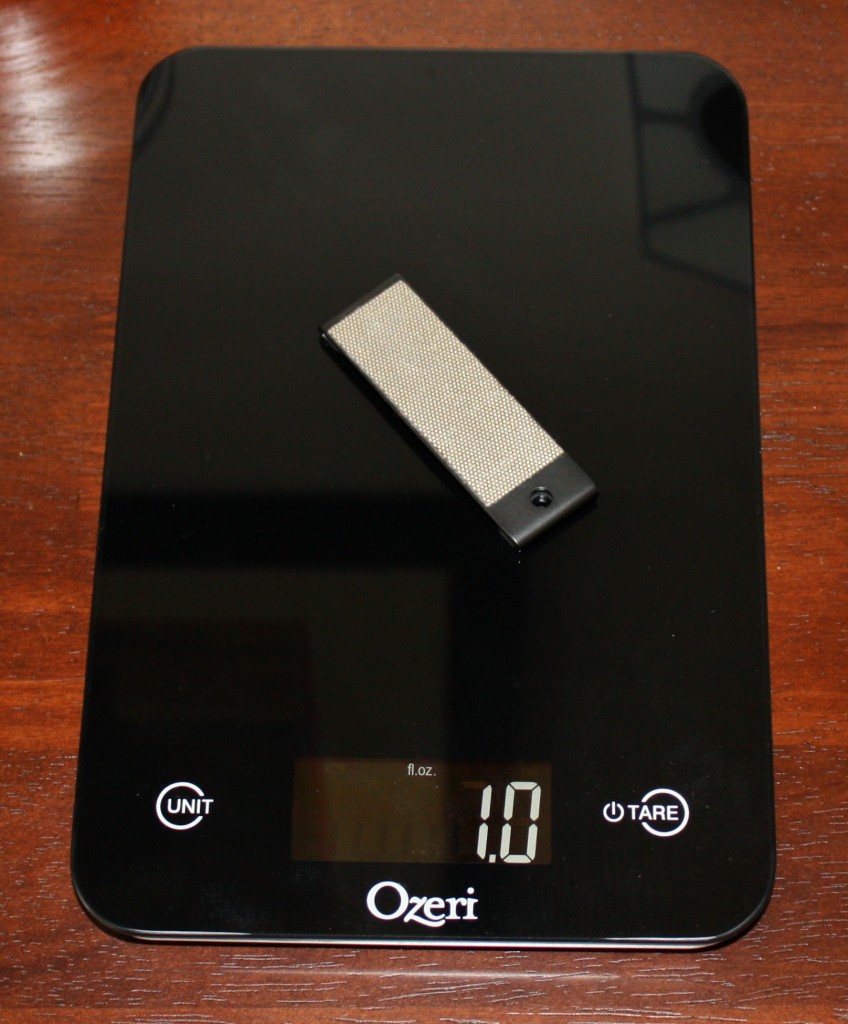 A sharpening stone is generally one of those items that is heavy in a Bug Out Bag or Go Bag. If you choose not to go with a stone and go with one of the smaller DMT plastic sharpeners, they generally roll around loos in your pack and are hard to find. The M-Sharp stays put when attached via Molle but also has a small lanyard hole for additional carrying options.

In the end, this is one of those items that makes you think, “why didn’t I think of that”! This is an item that we will put on all our Molle gear for any touch ups but also to have in a SHTF scenario. The M-Sharp is highly recommended if you use Molle gear or even if you don’t due to its size and extreme lightweight. What a brilliant idea!